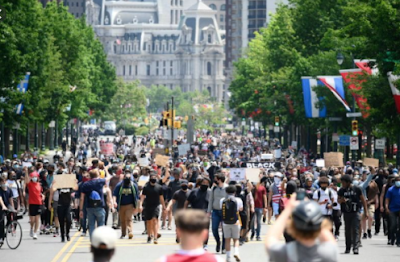 Ralph Cipriano offers a piece at www.bigtrial.net on the Philadelphia Police Department’s mismanagement in regards to handling the protests in the city.

When it comes to managing protests, the Philadelphia Police Department appears mired in mismanagement.

When the George Floyd protests first hit the city on May 30th, thousands of protesters showed up, and the cops were totally unprepared and woefully understaffed. The result -- widespread and uncontrolled rioting, looting, and arson fires that left behind hundreds of millions of dollars in property damage.

Today, the department was totally overstaffed with hundreds of extra cops for two peaceful protests that attracted little more than a hundred protesters.

But under the command of First Deputy Commissioner Melvin Singleton, who has taken over the handling of protests from recently demoted Deputy Commissioner Dennis Wilson, the department today brought in 100 bicycle cops, as well as at least 100 other cops who were being redeployed from units that included the Evidence Custodian Unit, the Firearms Training Unit, the Standards and Accountability Division, and the Police Recruit Training Unit. The police department also called in an additional 50 additional cops from the Major Incident Response Team.

The total cost of the extra police personnel had to run into hundreds of thousands of dollars. All to babysit a total of some 200 protesters at two peaceful demonstrations.

The extra cops were assigned to stake out City Hall, Love Park, police headquarters, the Liberty Bell and the Art Museum

But in the morning some 100 protesters showed up at the school district headquarters, mostly teachers, who were there to say they wanted Philly's cops out of the public schools.

In the afternoon, some 100 protesters showed up at the Art Museum.

Singleton took over protest management from former Deputy Commissioner Dennis Wilson, who on June 25th, accepted a voluntary demotion to chief inspector as a punishment for ordering the June 1st teargassing of protesters who were trying to shut down traffic on the Vine Street Expressway.

It was the Kenney administration that was responsible for getting rid of former Police Commissioner Richie Ross and Deputy Police Commissioner Joseph Sullivan. Under its former leadership, the Philadelphia Police Department earned widespread praise for its handling of the Pope Francis's 2015 visit in 2015, the 2016 Democratic National Convention, and the Eagles 2018 Super Bowl parade.

But after the Kenney administration got rid of Ross and Sullivan, they brought in rookie Police Commissioner Outlaw. The department was caught flat-footed by the George Floyd protests. The result was the biggest municipal disaster since former Mayor Wilson Goode dropped a bomb in 1985 on Osage Avenue. 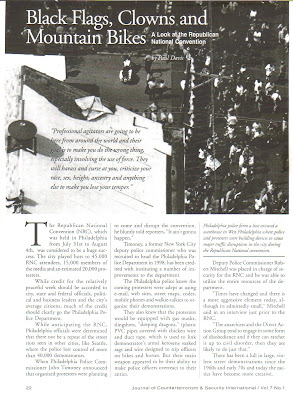 And you can read how the Philadelphia police under the leadership late John Timoney handled the protests during the 2000 Republican convention in my Counterterrorism magazine above and below: 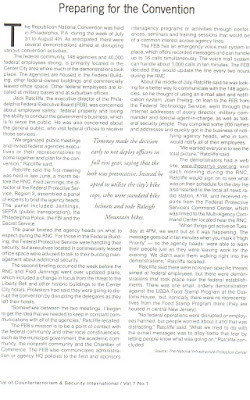 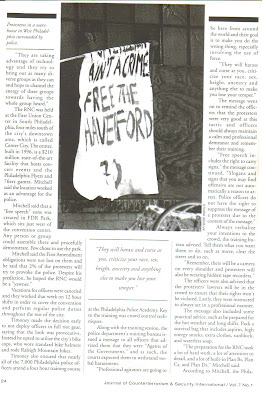 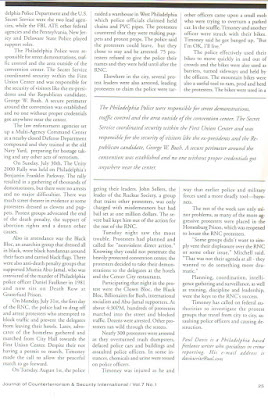 Note: You can click on the above to enlarge.
Posted by Paul Davis at 12:23 AM