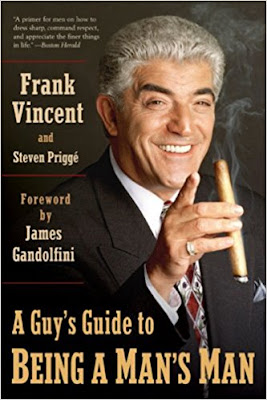 The Hollywood Reporter offers a piece on the death of Frank Vincent, a fine actor who portrayed convincingly mobster ‘Billy Batts’ in Martin Scorsese’s crime classic Goodfellas and other mobsters in Scorsese’s Raging Bull and Casino, as well as a mobster on HBO's The Sopranos, has died. .

Frank Vincent, who played the vicious mob boss Phil Leotardo on The Sopranos, has died. He was 78.

Vincent died Wednesday of complications from heart surgery in New Jersey, according to reports from The Blast and TMZ.

Vincent also portrayed tough guys for director Martin Scorsese in Raging Bull (1980), Goodfellas (1990) — as the real-life Gambino gangster Billy Batts, he with the memorable line, "Go home and get your shine box!" — and Casino (1995). On HBO's The Sopranos, Leotardo often butted heads with James Gandolfini's Tony Soprano as he eventually rose to become boss of the Lupertazzi crime family.

Note: Frank Vincent was also the author of A Guy's Guide to Being a Man's Man.
Posted by Paul Davis at 10:09 PM