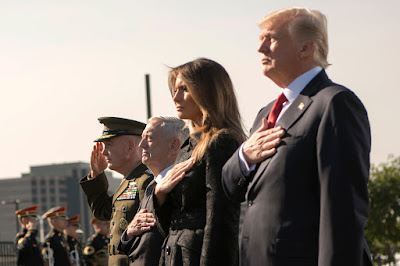 WASHINGTON, Sept. 11, 2017 — When the United States came under attack on Sept. 11, 2001, Americans turned their sorrow “into an unstoppable resolve to achieve justice” in the names of the fallen, President Donald J. Trump said at this morning’s Pentagon 9/11 Memorial observance.

“It was the worst attack on our country since Pearl Harbor, and even worse because this was an attack on civilians -- innocent men, women, and children whose lives were taken so needlessly,” the commander in chief said.

Trump noted that for the more than 300 family members at the Pentagon anniversary today, not a single day goes by when they don’t think about the loved ones stolen from their lives. “Today, our entire nation grieves with you and with every family of those 2,977 innocent souls who were murdered by terrorists 16 years ago,” he said.

“The [sanctified] grounds on which we stand today are a monument to our national unity and to our strength,” Trump said. “For more than seven decades, the Pentagon has stood as a global symbol of American might -- not only because of the great power contained within these halls, but because of the incredible character of the people who fill them. They secure our freedom, they defend our flag, and they support our courageous troops all around the world.”

Among the 184 Americans who perished at the Pentagon were young enlisted service members, dedicated civil servants who had worked In the Pentagon for decades and veterans who served the U.S. in Korea, Vietnam and the Middle East, he said, adding that all of them loved their nation and pledged their lives to protect it.

“That September morning, each of those brave Americans died as they had lived: as heroes doing their duty and protecting us and our country. We mourn them, we honor them, and we pledge to never, ever forget them,” Trump said.

Trump also paid tribute to those who boarded American Airlines Flight 77 at Washington Dulles International Airport that morning, minutes before it slammed into the Pentagon’s west side.

“Every one of them had a family, a story and beautiful dreams. Each of them had people they loved and who loved them back. And they all left behind a deep emptiness that their warmth and grace once filled so fully and so beautifully,” he said.

The living, breathing soul of America wept with grief for every life taken on that day, Trump said. “We shed our tears in their memory, pledged our devotion in their honor, and turned our sorrow into an unstoppable resolve to achieve justice in their name.”

The terrorists who attacked the United States thought they could incite fear and weaken the spirit of the nation, he noted, adding, “But America cannot be intimidated, and those who try will soon join the long list of vanquished enemies who dared to test our mettle.”

Terrorists tried to break Americans’ resolve when they attacked the Pentagon, Trump said, adding, “But where they left a mark with fire and rubble, Americans defiantly raised the Stars and Stripes -- our beautiful flag, that for more than two centuries has graced our ships, flown in our skies, and led our brave heroes to victory after victory in battle; the flag that binds us all together as Americans who cherish our values and protect our way of life.”

Woven into the American flag is the story of the nation’s resolve, he said.

“We have overcome every challenge -- every single challenge, every one of them -- we've triumphed over every evil, and remained united as one nation under God. America does not bend. We do not waver. And we will never, ever yield,” Trump said.

At the Pentagon 9/11 memorial, he said, with hearts both sad and determined, the nation honors every hero who keeps Americans safe and free, and they pledge to work together, to fight together, and to overcome together every enemy and obstacle in the country’s path.

“Our values will endure,” Trump said. “Our people will thrive. Our nation will prevail. And the memory of our loved ones will never, ever die.”