Inky Readers Hit Paywall: If You Want To Read The Philadelphia Inquirer (And Philadelphia Daily News) Online, You'll Have To Pay 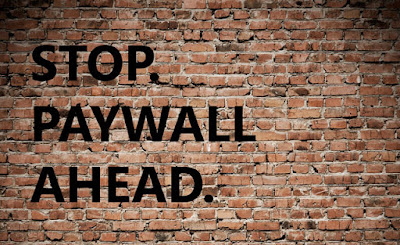 From 1999 until recently, I was a contributor to the Philadelphia Inquirer. The newspaper cut way back on freelance contributors, so I’ve moved on to the Washington Times and other publications.

Another change at the Inquirer, known also as the “Inky,” is that you will have to pay to read the newspaper online.

Ralph Cipriano, a former Inquirer staffer, offers his take on the newspaper paywall at Bigtrial.net.

Philadelphia At 10:30 a.m. on the Tuesday after the Labor Day weekend, visitors to philly.com ran into a big surprise -- a brand new paywall.

If you were one of those readers who had already read 10 stories on philly.com that month, you were out of luck. No more freebies. Your only option, besides hopping on another computer, or accessing the site from another web browser, was to sign up for "unlimited digital access for 99 cents for four weeks, and $2.99 per week thereafter."

… So, as a free service to all those former visitors to philly.com who are now restricted from the site, here's what you missed.

Climaxing the newspaper's blanket coverage of the statue wars, former Inquirer fashion columnist Elizabeth Wellington weighed in to say that she also visited both statues and found the Afro Pick statue to be not empowering.

This was a major development, and in shocking contrast to Jones's stance.

Note: It is a shame that newspapers and other publications can't seem to come up with a way of financing themselves through online advertising. This is, after all, the information age. So what better way to offer information to all than through free online access?
Posted by Paul Davis at 11:21 PM