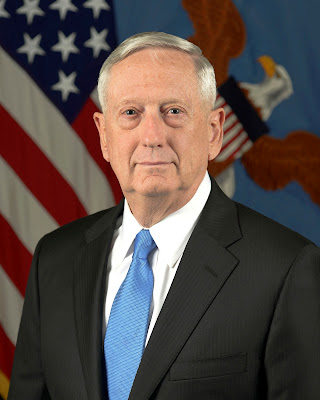 WASHINGTON, Sept. 3, 2017 — Defense Secretary Jim Mattis (seen in the above photo), standing in front of the White House this afternoon after the latest and largest nuclear test carried out by North Korea, said the United States has many military options for dealing with Kim Jong Un's provocations and that President Donald J. Trump wanted to be briefed on each one.

Marine Corps Gen. Joe Dunford (seen in the below photo), the chairman of the Joint Chiefs of Staff, joined Mattis for his announcement. At about 11:30 p.m. EDT last night, the U.S. Geological Survey's Earthquake Hazards Program detected a magnitude 6.3 explosion, about 13 miles east-northeast of Sungjibaegam, North Korea, located near the site where North Korea has detonated nuclear explosions in the past, according to a USGS statement. 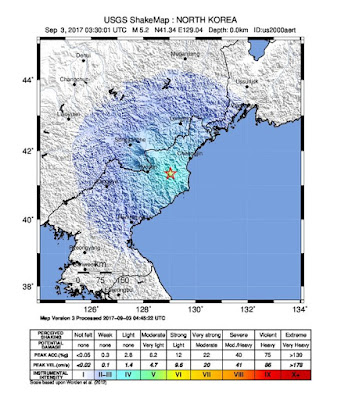 Other institutions and organizations specializing in seismic detection also reported the explosion and resulting seismic signature.

The Korean Central News Agency announced that North Korean scientists had carried out a test in the country's northern nuclear test ground of a hydrogen bomb built to sit on top of an intercontinental ballistic missile, describing the device as a two-stage thermonuclear weapon.

Media reports say that the test was the most powerful of the six, but there is no official measurement yet of the force of the hydrogen weapon.

In his remarks, Mattis said they had made clear to the president that the United States has the ability to defend itself and its allies -- South Korea and Japan -- from any attack.

"Our commitments among the allies are ironclad," the secretary added. "Any threat to the United States or its territories, including [the U.S. territory of] Guam or our allies, will be met with a massive military response, a response both effective and overwhelming."

This nuclear test was North Korea's sixth since 2006.

The weapon tested last night was a fusion bomb, also called a hydrogen bomb or thermonuclear weapon. Fission weapons, such as those that fell on Hiroshima and Nagasaki in World War II, are sometimes called atomic bombs.

In a hydrogen bomb, according to a 2012 paper by Martin E. Hellman, a Stanford University professor, a primary element is an implosion fission weapon that is used to ignite the secondary fusion reaction.

The Air Force Technical Applications Center at Patrick Air Force Base in Florida, is the only federal organization whose mission is to detect and report technical data from foreign nuclear explosions. The center operates and maintains a 3,600-sensor global network of nuclear event detection equipment called the U.S. Atomic Energy Detection Systems, the largest sensor network in the Air Force.

Once a disturbance is detected underground, underwater, in the atmosphere or in space, the event is analyzed for nuclear identification, and the findings are reported to national command authorities.

"All members unanimously agreed on the threat North Korea poses, and they remain unanimous in their commitment to the denuclearization of the Korean Peninsula," he said.

"We are not looking to the total annihilation of a country, namely North Korea. But as I said, we have many options to do so," Mattis added.

The U.N. Security Council announced that it will have a meeting about the nuclear test tomorrow morning.
Posted by Paul Davis at 6:28 PM