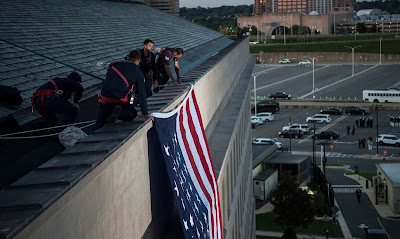 Cheryl Pellerin at the DoD News  offers the below piece:

WASHINGTON, Sept. 11, 2017 — During a Pentagon remembrance today on the 16th anniversary of the 9/11 terrorist attacks, Defense Secretary Jim Mattis and Chairman of the Joint Chiefs of Staff Marine Corps Gen. Joe Dunford honored those who died, the survivors and the families left behind.

On that day, 184 people lost their lives in the halls of the Pentagon and on American Airlines Flight 77, Dunford said in remarks he made before introducing the secretary.

“Sixteen years ago, when terrorists attacked the Pentagon, the World Trade Center, and as they attempted other attacks in Washington, D.C., they did so with a sense of purpose. They were attacking symbols that reflect our way of life and our values,” the general said.

The terrorists believed that the attacks would shake U.S. commitment to those values, he added, and quoted then-President George W. Bush, who hours after the attacks said the terrorists thought they could frighten Americans into chaos and retreat. But they were wrong.
Renewed Commitment

“Instead of retreat, the tragedy of 9/11 produced in us an unyielding resolve,” Dunford said.

“Instead of hopelessness, mourning turned into action. And we have strengthened our commitment to the idea that the freedom of many should never be endangered by the hatred of a few.”

“If we truly want to honor those remembered today, each of us will walk away from this ceremony with a renewed sense of commitment to our values in the cause of freedom,” he said.

In his remarks Mattis welcomed the 306 family members gathered at the Pentagon to remember their loved ones lost 16 years ago today.

“We are here to honor those 2,977 lives claimed by the brutal attacks of Sept. 11, 2001, -- the men and women who woke that day, never anticipating an attack on their place of work or against this country, innocents who hailed from 90 nations and all walks of life,” the secretary said.

Heroism and compassion were boundless on 9/11, he added. Patriots from all backgrounds and all walks of life responded with speed, courage and compassion.

“In the aftermath of the attack,” Mattis said, “our service members -- our nation -- rallied together as one. For, while we had never asked for this fight, we are steadfastly committed to seeing it through, as President [Donald J.] Trump has made abundantly clear, and with no more temporizing, as our example of leadership galvanized other nations to stand united against this threat to all humankind.”

The secretary said that “maniacs” disguised in false religious garb thought that hurting Americans would scare them that day.

“But we Americans are not made of cotton candy, we are not seaweed drifting in the current, we are not intimidated by our enemies,” the secretary added.

“And Mr. President, your military does not scare,” Mattis told Trump, who also spoke at the ceremony.

The men and women of America’s armed forces have signed a blank check to protect the American people and to defend the constitution, a check payable with their lives, Mattis said.
“Your military stands ready and confident to defend this country, this experiment in democracy,” the general added. “And we will continue to do so using all means necessary and as long as necessary.”

On this 16th anniversary of 9/11, Mattis said, “We remember the loss of so many in New York City, in a somber field in Pennsylvania, and here in this very building behind me, and in many battles since. And some of those battles are still raging.”

To the families of those who perished, the secretary added, “The loss you have endured drives us in our mission today and every day.”

Note: In the above DoD photo Pentagon workers unfurl a large American flag over the west side of the Pentagon at sunrise on Sept. 11, 2017, on the 16th anniversary of the 9/11 terrorist attacks. The DoD photo was taken by Air Force Tech. Sgt. Brigitte N. Brantley.
Posted by Paul Davis at 11:26 PM