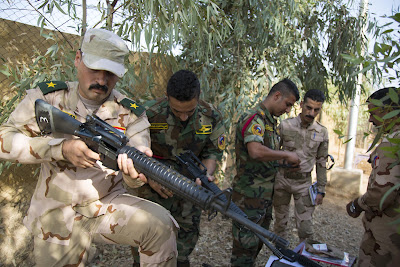 WASHINGTON, Oct. 4, 2017 — The end of the Islamic State of Iraq and Syria is in sight, but the military effort is only one part of the coalition campaign to defeat ISIS, a Defense Department official told a House Armed Services subcommittee yesterday.

Mark Swayne, acting deputy assistant secretary of defense for stability and humanitarian affairs in the Office of the Assistant Secretary of Defense for Special Operations and Low-Intensity Conflict, testified before the HASC Subcommittee on Oversight and Investigations.

The topic was DoD efforts to enable Iraq to achieve and maintain stability after the recent liberation of Mosul.

“The key to preventing the re-emergence in Iraq of ISIS or any other violent extremist organization is effective and inclusive governance,” Swayne said in prepared remarks.

“For this to develop,” he added, “the United States and our coalition partners must continue to work by, with and through the government of Iraq to consolidate military gains and stabilize liberated areas.”

Such an approach puts the military instrument of power in a supporting, enabling role, Swayne said.

The Iraqi security forces led the way in defeating ISIS in Mosul, liberating the city and freeing its people. The Iraqi forces carried a winning momentum to the next ISIS stronghold in Tal Afar, delivering swift victory there, the acting deputy assistant secretary said.

“One year ago, virtually all of Ninevah governorate was controlled by ISIS. In late August, Baghdad announced [its] complete liberation,” Swayne said. “Every day, Iraqi security forces fight to return their country to the Iraqi people and out of the hands of ISIS terrorists.”

As Iraqi security forces maintain the initiative and continue to bring the fight to ISIS, they are backed by strong Iraqi leadership in Baghdad and unwavering support from a 73-member global coalition, he added.

Swayne said that to make possible long-term peace in Iraq, the United States and its coalition partners are bolstering the government of Iraq, enabling security services and promoting local reconciliation among the Iraqi people.

“In the fight to defeat ISIS,” he said, “we saw unprecedented cooperation between the Kurdish peshmerga forces and the Iraqi security forces -- fighting and taking casualties to achieve a common goal for Iraq. The recent Kurdish referendum on independence presents a challenge to this cooperation but hopefully this can be overcome.”

The military defeat of ISIS is the first step in a long-term commitment to rid the world of violent extremist organizations, Swayne added, noting that the seeds of the next extremist resurgence lie in the rubble of the defeat ISIS campaign.

“Following the defeat of ISIS’ physical caliphate, it is vital that the government of Iraq, with the support of the U.S. government and the international community, continues to prioritize humanitarian assistance and stabilization efforts in order to allow the expedient return of internally displaced persons,” he said.

Millions of Iraqis have returned home but more than 3.2 million are still displaced because of ISIS occupation, Shayne said.

“We are working closely with the Department of State, the U.S. Agency for International Development, the United Nations and our coalition partners on near-term stabilization activities to support the government of Iraq,” he said. Examples of U.S.-supported activities include demining, removing rubble and restoring essential services and access to potable water.

DoD does not have the authority to conduct stabilization activities on its own, but it continues to support interagency partners in their efforts to stabilize Iraq and the results speak for themselves, he added.

More than 2.2 million Iraqis, including more than a quarter million Mosul residents, have returned home, Shayne said, and there is more work to do.

Continuing the Global Campaign against ISIS

Shayne said part of ISIS’s success comes from its ability to capitalize on sectarian grievances and disenfranchisement.

Iraq’s Prime Minister Haider al-Abadi is personally committed to the effort, Shayne said, and has said that he will thoroughly investigate any such allegations and hold those deemed responsible accountable in accordance with due process and Iraqi law.

Even after the ISIS caliphate is physically destroyed, the global campaign to defeat ISIS will continue, he added, to bolster long-term stability in Iraq by engaging ISIS globally and preventing the flow of foreign fighters back to the region.

The deputy assistant secretary said the whole-of-government global campaign will continue to attack ISIS and its affiliates to further degrade their ability to recruit and maintain a fighting force, and the U.S.-led coalition and interagency partners will pressure the international community to counter the radical Salafi-jihadist ideology that fuels many of the world’s violent extremist organizations.

“All of these efforts will serve to help prevent a resurgence of ISIS, provide an opportunity for inclusive and effective governance at all levels to thrive and promote long-term stability,” Shayne said.

Note: In the above U.S. Army photo Iraqi security forces trainers disassemble an M16 rifle before they teach their fellow trainers at Camp Taji, Iraq on Sept. 24, 2017. The photo was taken by Spc. Alexander Holmes.
Posted by Paul Davis at 2:50 PM