'Lost Kingdom: The Quest For Empire And The Making Of The Russian Nation' & 'Red Famine: Stalin's War On Ukraine' 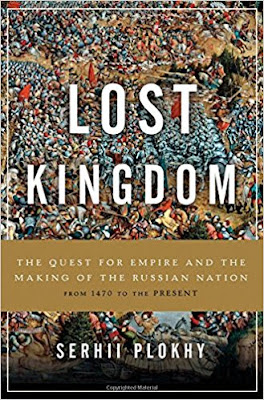 In a European continent torn by incessant warfare over the centuries, Ukraine deserves sympathy for its most-abused-state status. As the real estate adage holds, “Location is everything.” And Ukraine has the misfortune to be snuggled against the southeast corner of Russia, historically its prime tormentor.

Two complementary books trace Ukraine’s travails, climaxing with Russia’s brutal seizure of a Ukraine that sought to become an independent nation after the 1991 collapse of communism and the USSR. Russian strongman Vladimir Putin decreed otherwise, and the Red Army crushed Ukrainian hopes for independence.

The Harvard historian Serhii Plokhy, the leading Western scholar on Ukraine, details Moscow’s historic insistence that Russia and its East Slavic neighbors occupy a joint historical space, and essentially comprise a single nation — despite strong language, cultural and religious differences.
Ukraine attempts to retain its independent, medieval Kyvian state over the centuries had off-again/on-again successes. At one point it was amalgamated into Poland.

In the 19th century Russian imperial authorities compromised (in a sense) by creating a tripartite nation composed of three tribes: Great Russian, Little Russian (Ukraine) and Belarusian. Russian revolutions in 1905 and 1917 destroyed the forced alliance, and Ukraine was independent again until the communists seized power after World War I. The “Lost Kingdom” of Mr. Plokhy’s title refers to its involuntary incorporation into the USSR.

Although the reborn-state received swift recognition from many European countries (plus the United States) Lenin moved to reclaim it for the new USSR in January 1918. But would the mostly-peasant regime mesh with the new communist regime? Karl Marx considered peasants “at best an ambivalent asset.” In an 1852 essay he had claimed they were not a class and hence had “no class consciousness”

Lenin was more pragmatic — and even more so because Ukraine had agricultural resources needed by the rest of the USSR. The area’s fertile land and mild climate permitted two grain crops annually, far more than the rest of Russia.

The first scheme was to convert private farms into collective agriculture, run by the state. Lenin put it directly in a 1922 message to colleague Vyascheslav Molotov: “We must teach these people a lesson right now, so that they will not even dare to think of resistance in coming decades.” The dreaded Cheka, the secret police, aided by the Red Army, slaughtered resistant rural leaders by the hundreds. But grain production was not enough to alleviate national shortages.

Thus Stalin and the ruling hierarchy in the early 1930s moved to a more draconian plan: to destroy what remained of Ukrainian culture and to seize the land for the state. 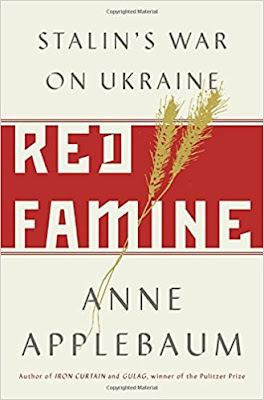 Segue here to Anne Applebaum’s gripping account of the grim years during which Moscow deliberately sought to starve Ukraine into submission. Ms. Applebaum won a Pulitzer Prize for an earlier book, “Gulag”, on the Soviet prison system. “Red Famine” relates a story that is perhaps more cruel, an account of the misery the Communists inflicted on an innocent populace.

The state-evoked famine that stretched over two decades is well-known in USSR history. The consensus of previous historians was that the primary reason for starvation was Stalin’s campaign for collective farms. But having gained access to Ukraine archives, Ms. Appelbaum relates an even more chilling story: that in its latter stages, the motive driving “land reform” was in fact the deliberate obliteration of the Ukrainian people.

http://www.washingtontimes.com/news/2017/oct/22/book-reviews-lost-kingdom-by-serhii-plokhy-and-red/
Posted by Paul Davis at 9:28 AM