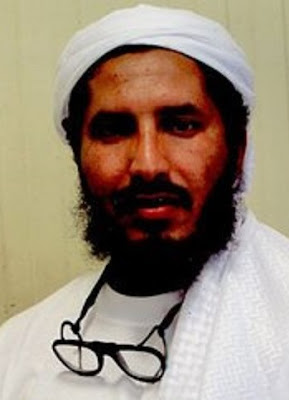 The Department of Defense announced today that Ahmed Mohammed Ahmed Haza al-Darbi (seen in the above photo) was sentenced to 13 years in confinement for conspiracy, attacking civilian objects, hazarding a vessel, terrorism, attempts, and aiding the enemy.

The sentencing hearing took place today in a military commission courtroom at the U.S. Naval Station at Guantanamo Bay, Cuba.

During his Feb. 20, 2014, guilty pleas, al-Darbi pled guilty to the charged offenses stemming from an attempt to carry out terrorist attacks against shipping vessels in the Strait of Hormuz and off the coast of Yemen, and a completed terrorist attack against the French oil tanker, MV Limburg. As part of his plea he agreed to delay his sentence proceeding in order to cooperate with the Government.

Under the terms of the pre-trial agreement, al-Darbi agreed to testify for the United States at any military commission, federal court proceeding, or federal grand jury proceeding against other individuals alleged to have been involved in terrorist activity.  al-Darbi has cooperated with U.S. law enforcement and intelligence agencies and, as part of the pre-trial must continue to cooperate.  In exchange for al-Darbi's guilty plea and promise to cooperate and testify, the Convening Authority agreed to limit the amount of confinement that would be approved.  If al-Darbi fails to comply with his promise to testify and cooperate, his prior plea agreement could be by the Convening Authority.