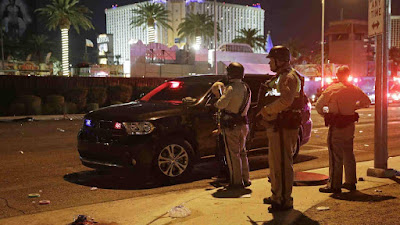 The Washington Times offers a piece on the tragic shooting in Las Vegas.

LAS VEGAS (AP) — A gunman perched high on the 32nd floor of a Las Vegas Strip casino unleashed a shower of bullets down on an outdoor country music festival below, killing at least 50 people and wounding 406 as tens of thousands of frantic concert-goers screamed and ran for their lives, officials said Monday. It was the worst mass shooting in modern U.S. history.

Country music star Jason Aldean was performing Sunday night at the end of the three-day Route 91 Harvest Festival when the gunman opened fire across the street from inside the Mandalay Bay Hotel and Casino. SWAT teams quickly descended on the concert and the casino, and officers used explosives to get into the hotel room where the suspect was inside, authorities said.

The gunman died at the scene, reportedly by his own hands, and was identified by Clark County Sheriff Joseph Lombardo as Stephen Paddock. A motive as not immediately known.