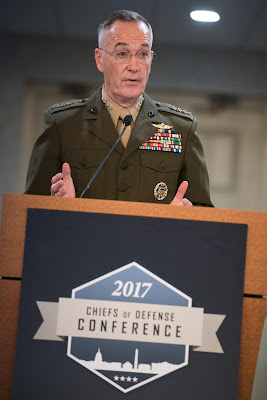 The chairman of the Joint Chiefs of Staff hosted the meeting so the chiefs could chart the progress in the struggle against violent extremists and look at ways to improve the strategies in the long war against the terrorists.

Dunford; Brett McGurk, the president’s special envoy for the global coalition to defeat ISIS; and Australian Army Col. David Kelly, an exchange officer on assignment to the Joint Staff, spoke to the press following the conference.

During the meeting, the senior leaders from every part of the globe looked at the threats posed by extremist groups and examined strategies and tactics to combat them, the chairman said. The chiefs concluded “that we are dealing with a transregional threat and it is going to require more effective collective action by nations that are affected,” Dunford said.

He noted that in Iraq and Syria the coalition saw more than 40,000 foreign fighters from 120 different countries. The chairman added that figure describes the range of the threat in a nutshell.

The chiefs spoke mostly about the Islamic State of Iraq and Syria, Dunford said, because they regard ISIS as the most virulent example of violent extremism in the world today. Still, he added, they envision the military network that has been built to combat ISIS will also deal with other transregional extremist threats as they arise.

The key takeaway from the conference is that “the most effective action against these groups is local action, but local action has to be informed by the nature of the trans-regional aspect and so cooperation globally is important,” the chairman said. But, he noted, global actions must be informed by local actions.

Violent extremists are connected by three things that Dunford calls the “connective tissue” of terrorism: foreign fighters, finances and the narrative. Cutting the connectivity between these groups is key to defeating them, the general said. Doing this will enable local forces to deal with the challenges posed by these groups, he said.

One example is the five-month battle for Marawi in the Philippines, which the chiefs were briefed about yesterday, Dunford said. About 30 foreign fighters returned to the Mindanao region after fighting with ISIS and persuaded local extremist groups to pledge to ISIS and launch attacks in the city. “Small numbers of ISIS leaders are attempting to leverage local insurgencies,” the chairman said.

The coalition is seeing something similar in Africa, he said, where a number of local insurgencies rebranded themselves and pledged allegiance to ISIS.

The chiefs discussed the movement of these individuals and the need for intelligence- and information-sharing within the coalition to stop them, Dunford said.

McGurk helps coordinate the whole-of-government approach to the campaign against violent extremism. He said the chiefs spoke a great deal during the meeting about all the efforts against ISIS, including the stabilization and humanitarian programs that are included in every military campaign. He also said foreign fighters trying to get into or out of Iraq and Syria has come to a near halt. “We believe we’ve cut their revenue down to the lowest level ever,” he said.

“Most interestingly today, we did a little walk around the globe, because it is not just about Iraq and Syria,” McGurk said. “We had very detailed presentations of operations against ISIS in Marawi, in the Sahel, we talked about how we are tracking foreign fighters around the world … and we had a very good presentation from the Kingdom of Saudi Arabia about the leading efforts that they have taken on to counter the narrative and leading the counter-messaging campaign in that part of the world.”

The chairman said the campaign against ISIS is at an “inflection point” and that all the chiefs discussed what’s next. “One of the points that was made several times today is the need for the coalition to stay focused on Iraq and Syria for an enduring period of time,” Dunford said.

Defeating the narrative of the terror groups is one of the toughest nuts to crack, he said, but progress is being made. “I’m not complacent, but I am encouraged by how the success on the ground in translated into undermining the credibility of the narrative,” the chairman said. “There have been some studies of young people who are radicalized and those numbers seem to go down. There are certainly indicators that fewer young people are being radicalized, and that’s as a result of us being able to demonstrate what ISIS is. They can only behead so many people and treat people they way they did in Mosul and Raqqa before those stories came out.”

The Saudi counter-ISIS messaging effort now has 41 nations involved. “Clearly, credible Islamic voices are going to be the ones that matter most in countering the narrative of ISIS, and countering it and discrediting it for what it is,” he said.

With 75 nations and entities such as NATO and the African Union Mission in Somalia, there are some who think the coalition is too big, Kelly said. But the coalition thrives on the diversity of views the coalition offers, he noted.

The coalition is not a formal alliance, nor does any nation want it to be one, Dunford said. It all comes down to helping local and regional forces handle their security problems, and sharing information and intelligence to sever the connective tissue and defeat the narrative. “The bigger the coalition is, the better,” the chairman said.
Posted by Paul Davis at 12:26 PM