Why The United States Needs A 355-Ship Navy Now 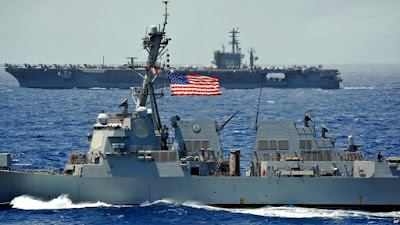 Robert O’Brien and Jerry Hendrix state their case for a 350-ship Navy in National Review.

One of President Trump’s signature campaign promises to the American people was a 350-ship Navy. The Navy itself has stated unequivocally that it needs a bare minimum of 355 ships to meet the missions with which it has been tasked by our regional combatant commanders. Yet, sadly, it is becoming clear that no real budgetary steps have been or will be taken to fund this promise. Further, there is nothing on the horizon to suggest that anything will change on this front.

The failure to rebuild America’s fleet could not have come at a worse time. The world has grown increasingly dangerous, with a nuclear madman in North Korea testing an ICBM a month, mullahs in Tehran plotting the takeover of the Middle East, Russia engaging in “frozen conflicts” in Ukraine, Georgia, and Moldova, a very hot civil war in Syria, and China appropriating a vast swath of the Pacific to itself. The forgoing list does not even take into account the United States’ continuing wars in Iraq, Afghanistan, and dozens of other remote locales where we are in daily combat with al-Qaeda, ISIS, the Taliban, and their assorted jihadi fellow travelers.

Note: The above U.S. Navy photo is of the USS Chung-Hoon and the USS Nimitz.

You can click on the photo to enlarge.
Posted by Paul Davis at 8:30 PM