A Look Back At FBI Agent And Russian Spy Robert Hanssen 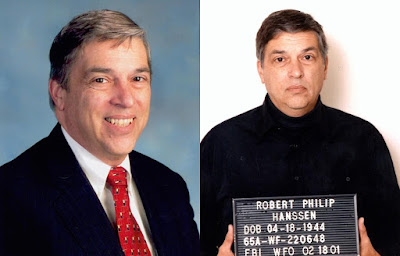 The International Spy Museum in Washington D.C. offers a look back at former FBI agent and Russian spy Robert Hanssen

Was the son of a Chicago police officer and a housewife. Howard Hanssen was part of a special division called the Red Unit, created to ferret out communist sympathizers during the Red Scare.

Attended Knox College in Galesburg, Illinois, majoring in chemistry while also taking Russian as a foreign language. After being rejected for a position as a cryptographer with the NSA, enrolled in the Dental School of Northwestern University in 1966. At Northwestern, Hanssen became known for his penchant for wearing Black suits to class every day. In 1968, halfway through the Dental program, Hanssen grew tired of it and decided he would rather become a psychiatrist. After growing tired of this pursuit he returned to Northwestern and earned an MBA in accounting and information systems.
Met Bonnie Wauck, a student nurse at a state mental facility in Chicago in 1965. The two married on August 10, 1968. Wauck was the daughter of a University professor and a practicing Catholic, and member of the Opus Dei organization. Four years later Robert enrolled in the Chicago Police Department and was soon assigned to a special training class for a new division of the department that focused on police corruption.

Was distrusted by many within the division, including his boss, John Clarke. Was considered a devoted family man in his community, spending time with his children, teaching them to excel at academics. He also became an enthusiastic member of Opus Dei, which was deemed a cult by many. The organization instructed its members to attend Catholic church services every day and confession once each week. Applied twice to the FBI and was accepted the second time in January 1976. Was assigned to the Bureau’s Gary, Indiana office but was transferred two years later to New York City. Living with his wife and four children in Scarsdale, New York, Hanssen was having a tough time making ends meet and decided to exploit his position with the FBI.

Disenchanted by the lackadaisical attitude of fellow FBI agents, Hanssen approached Russian agents and offered to sell secret documents. He was rewarded famously for his efforts but was caught by his wife while counting $20,000 and writing a letter to the Soviets in his basement. Thinking he was writing a love letter to a girlfriend, she demanded to know what was going on. He admitted to her where he had gotten the money but claimed that he had only given the Soviets useless information. Instead, he had actually provided the Soviets with very valuable information , including the identity of Dmitri Polyakov, a top-level Soviet double-agent. Rather than turn him into the authorities, she convinced him to confess his actions to an Opus Dei priest. The priest instructed him to give up his activities and to donate the money he received to Mother Theresa’s charities.

Was considered a highly intelligent agent, but his tepid interpersonal skill as well as his continued preference for black suits caused many to tag him with the nickname “the Mortician.” Unfortunately, the perception that he was an aloof, introverted worker hindered his upward mobility within the Bureau. Was transferred to the FBI headquarters in Washington, DC where he was initially assigned to develop a budget for the Bureau that was to be presented to Congress. Was moved to the Soviet Analytical Unit in 1983 and given a high security clearance. After a four year stint, was transferred back to New York.

Decided to re-establish his link to the Soviets. Knew that the FBI was not conducting surveillance on Victor Degtyar, a KGB Colonel living in Alexandria, Virginia. Hanssen therefore sent a letter to Degtyar, with instructions to pass another letter on to Victor Cherkashin, the head of Soviet espionage efforts in Washington. In this letter, Hanssen offered to turn over classified and highly sensitive information to the Soviets in return for $100,000. He also provided the name of three Russian agents who were working for the United States. Two of the agents were executed and one was imprisoned. 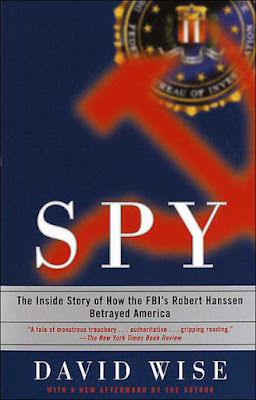 Note: To Learn more about the Robert Hanssen case I suggest you read David Wise's outstanding book Spy: The Inside Story of How the FBI's Robert Hanssen Betrayed America.
Posted by Paul Davis at 8:28 PM