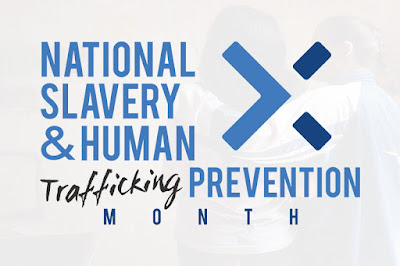 “Human trafficking is a nationwide public health and civil rights crisis. Its victims are everywhere: at truck stops, in cities, in rural areas, and in suburbs, and who now total an unconscionable 25 million victims globally according to some estimates. That means 25 million human beings—parents, siblings, and children—have been coerced into a commercial sex act, forced into labor, or exploited because they desperately seek a better life. It is a priority of the Department of Justice to combat this depraved and predatory behavior through swift and aggressive enforcement of our nation’s laws to bring traffickers to justice and restore the lives of victims and survivors.

“The Justice Department’s U.S. Attorneys’ Offices, working closely with the Federal Bureau of Investigation (FBI), other federal agencies, and our state, local, and tribal partners, are on the front lines, leading our shared fight against human trafficking in all its forms.  These entities are supported by the Department’s Civil Rights Division which is home to a team of dedicated investigators and prosecutors—the Human Trafficking Prosecution Unit (the HTPU)—tasked with bringing human traffickers to justice and vindicating the rights of their victims. Additionally, the Department’s Criminal Division includes the Child Exploitation and Obscenity Section (CEOS), which is committed to harnessing expertise in attacking the technological and systemic challenges that are involved in the sexual exploitation of minors, as well as other specialized prosecution teams who bring expertise in organized crime and money laundering.

“Our efforts have produced high-impact prosecutions to dismantle transnational organized human trafficking enterprises, have launched interagency anti-trafficking initiatives with unprecedented momentum, and have vindicated the rights and freedoms of countless victims and survivors.

“These efforts resulted in the conviction of nearly 500 defendants in trafficking cases in fiscal year 2017, and making $47 million available to help trafficking survivors.  Last fall, the FBI—along with state and local task forces and international law enforcement partners—recovered 84 minors and arrested 120 traffickers, as part a single week-long operation. However, we are keenly aware that many challenges lie ahead and we are committed to taking our efforts to the next level.

“In his Presidential Proclamation, President Trump asked us to ‘recommit ourselves to eradicating the evil of enslavement’ and to ‘pledge to do all in our power to end the horrific practice of human trafficking.’ In the spirit of the President’s request, the Justice Department is hosting a Human Trafficking Summit in Washington, D.C. on February 2, 2018, two days before Super Bowl LII.  The Super Bowl provides an opportunity to raise awareness of the surge in commercial sex activity around major sporting events, and of our commitment to finding and protecting sex trafficking victims who are at risk of being compelled, coerced, or exploited as minors in that context.

“The Human Trafficking Summit will be led by Associate Attorney General Rachel Brand and will convene law enforcement, victim support organizations, and the business community to focus on enhancing the strong partnerships behind all successful anti-trafficking efforts and identifying opportunities to increase collaboration and coordination as we take on new challenges.

“There is no room in a civilized society for those who choose to violate an individual’s rights and freedoms by subjecting them to any form of human trafficking. To those that still make that choice: make no mistake, the Justice Department will use every lawful tool to uncover your illegal activity and bring you to justice.”
Posted by Paul Davis at 8:02 PM