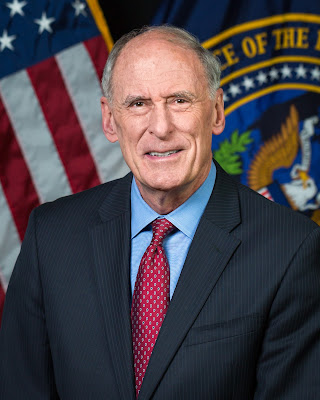 WASHINGTON, Feb. 13, 2018 — It’s a measure of the growth of cyber and America’s vulnerability to it that the cyber threat was at the top of the list of worldwide threats the director of national intelligence chose to highlight at a Senate Select Committee on Intelligence hearing today.

Daniel Coats (seen in the above photo) also covered Russia, China, Iran, North Korea and terrorism, but he led with the cyberwar that nations, organizations and sometimes individuals are fighting against the United States.

“We face a complex, volatile and challenging threat environment,” Coats told the senators. “The risk of interstate conflict is higher than any time since the end of the Cold War -- all the more alarming because of the growing development and use of weapons of mass destruction by state and nonstate actors. Our adversaries, as well as the other malign actors, are using cyber and other instruments of power to shape societies and markets, international rules and institutions, and international hotspots to their advantage.”

The United States is in competition for technological superiority, Coats said, noting that adversaries “seek to sow division in the United States and weaken U.S. leadership.”

Nonstate actors, which include terrorists and criminal syndicates, exploit weak state capacity in Africa, the Middle East, Asia and Latin America, to cause instability and violence within states and among states. A part of many of these malign actors is their use of cyber, the nation’s top intelligence official said. “Frankly, the United States is under attack -- under attack by entities that are using cyber to penetrate virtually every major action that takes place in the United States,” Coats told the panel. “From U.S. businesses, to the federal government, to state and local governments, the United States is threatened by cyberattacks every day.” Russia, China, Iran and North Korea pose the greatest cyber threats, he said, but others use cyber operations to achieve strategic and malign objectives.

“Some of these actors, including Russia, are likely to pursue even more aggressive cyberattacks with the intent of degrading our democratic values and weakening our alliances,” the intelligence chief said. “Persistent and disruptive cyber operations will continue against the United States and our European allies, using elections as opportunities to undermine democracy, sow discord and undermine our values.”

China also uses cyber to enable espionage and attack capabilities to support its national security and economic priorities, Coats said. “Iran will try to penetrate U.S. and allied networks for espionage and lay the groundwork for future cyberattacks,” he added. “And North Korea will continue to use cyber operations to raise funds, launch attacks and gather intelligence against the United States.”

Weapons of mass destruction is No. 2 on Coats’ list of threats. “Overall, state efforts to modernize, develop or acquire WMD, their delivery systems or the underlying technologies constitute a major threat to the United States and to our allies,” he said.

Coats called North Korea the most volatile and confrontational threat. “In addition to its ballistic missile tests and growing number of nuclear warheads for these missiles, North Korea will continue its longstanding chemical and biological warfare programs, also,” he told the senators.

Russia and China are expanding and modernizing their WMD arsenals, he said. “Iran's implementation of the Joint Comprehensive Plan of Action, the JCPOA, has extended the time it would take to develop a nuclear weapon from several months to about a year, provided Iran continues to adhere to the deal’s major provisions,” he added.

Pakistan is developing new types of short-range tactical nuclear weapons, Coats said, and Syria has used chemical weapons in its civil war. Nonstate actors would love to get their hands on chemical weapons and are trying to get biological weapons, he pointed out.

Terrorism remains a threat and runs the gamut from ISIS and al-Qaida to Lebanese Hezbollah and other affiliated terrorist organizations. Iran is a major state sponsor of terror groups.

The United States is not immune, Coats said, noting that individuals have “self-radicalized” and launched attacks against their fellow citizens.

“ISIS' claim to having a functioning caliphate that governs populations is all but thwarted,” Coats said. “However, ISIS remains a threat and will likely focus on regrouping in Iraq and Syria, particularly in ungoverned portions of those countries, enhancing its global presence, championing its cause, planning international attacks and encouraging members and sympathizers to attack their home countries.”

Al-Qaida also will remain a threat, Coats said, telling the senators that the organization remains intent on attacking the United States and U.S. interests abroad.

Space is another combat domain now, and Russia and China will continue to expand their space-based reconnaissance, communications and navigation systems in terms of numbers of satellites, breadth of capability and applications for use, the director said. “Both Russia and Chinese counter-space weapons will mature over the next few years as each country pursues antisatellite weapons as a means to reduce U.S. and allied military effectiveness and perceptions of U.S. military advantage in space,” he told the panel.

Russia is using a variety of capabilities short of war to assert its presence, Coats said. “President [Vladimir] Putin will continue to rely on assertive foreign policies to shape outcomes beyond Russia's borders,” he added. “Putin will resort to more authoritarian tactics to maintain control amid challenges to his rule.

Russia uses these tools – including the cyber weapon – because “it's relatively cheap, it's low risk, it offers what they perceive as plausible deniability and it's proven to be effective at sowing division,” he said. “We expect Russia to continue using propaganda, social media, false flag personas, sympathetic spokesmen and other means to influence, to try to build on its wide range of operations and exacerbate social and political fissures in the United States,” he added.

The director said Russia sees past actions against the United States as successful and that it views the 2018 U.S. midterm elections as a potential target for Russian influence operations.

China also is seeking to expand its regional influence and to globally shape events and outcomes, Coats said. “It will take a firm stance on its claims to the East China Sea and South China Sea, its relations with Taiwan and its regional economic engagement,” he told the senators.

China also intends to use its "One Belt, One Road" initiative to increase its reach to geostrategic locations across Eurasia, Africa and the Pacific, he said.

In Afghanistan, the capital city of Kabul continues to bear the brunt of the Taliban-led insurgency, as demonstrated by recent attacks in the city. “Afghan national security forces face unsteady performance, but with coalition support, probably will maintain control of most major population centers,” the director said. “Complicating the Afghanistan situation, however, is our assessment that Pakistan-based militant groups continue to take advantage of their safe haven to conduct attacks in India and Afghanistan, including U.S. interests therein.”

Iran will remain the most prominent state sponsor of terrorism and an adversary in the Middle East, especially in Iraq, Syria and Yemen, Coats said. “We also assess that Iran will continue to develop military capabilities that threaten U.S. forces and U.S. allies in the region,” he added.
Posted by Paul Davis at 2:04 AM