'It Was As Bad As You Can Imagine, Times Ten': Emotional Cops Reveal How They Ran Towards Rampaging School Shooter While Four 'Coward' Sheriff Deputies Stayed Outside And Refused To Go In 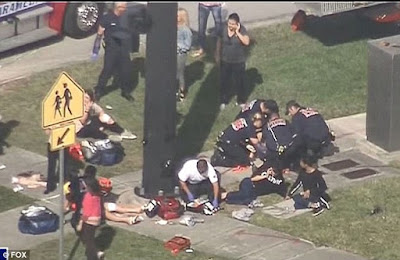 The Daily Mail offers a piece on the Florida school shooting and the accounts of two heroic police officers who rose to the occasion.

Two police officers have emotionally recalled the terrifying moment they entered the Florida school where a gunman was on the loose while a number of sheriff deputies cowered outside.

The incident 'was bad as you can imagine — times 10,' Crawford said in the aftermath of the campus shooting. 'I have a 2-year-old. I don't want to send him to school.'

A Marine veteran, Crawford recounted the 'awful' task of having to treat children suffering from gunshot wounds, adding that he wished he 'could have saved all of them.'

Crawford said that he stuffed 'combat gauze,' a medical dressing with a clotting agent, into the wounds of a 14-year-old boy who was shot in the back, and treated a young girl for a shrapnel injury.

You can read the rest of the piece and view a good number of photos via the below link:

http://www.dailymail.co.uk/news/article-5431965/The-hero-cops-ran-Florida-shooter.html
Posted by Paul Davis at 2:44 AM