The Long Hangover: Putin's New Russia And The Ghosts Of The Past 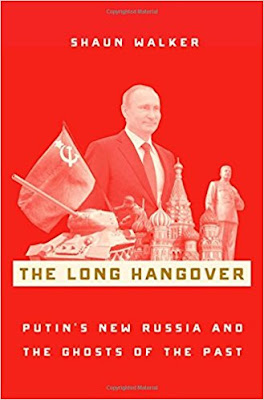 Veteran journalist and author Joseph C. Goulden offers a review in the Washington Times of Shaun Walker’s The Long Hangover: Putin's New Russia and the Ghosts of the Past.

Fellow writers take note: Your work is being monitored every day by a Russian agency that formerly was part of the Russian SVR foreign intelligence service, successor to the KGB of the old Soviet Union.

Officers examine the world’s press, searching for instances of what they term to be “Russophobia,” loosely defined as anything critical of the regime of President Vladimir Putin.

The agency’s director, Igor Nikolaichuk, maintains what is tantamount to an enemy list, ranking other nations’ hostility to Russia. One listing he displayed to Shaun Walker, author of this insightful look into Mr. Putin’s Russia, ranked Austria as the most hostile, followed closely by the U.S.

Depicting the West — and its “controlled press” — as an enemy scheming to overthrow Russia is one of the methods enabling Mr. Putin to maintain a considerable popularity. He is essentially unopposed as he seeks a fourth term in March, which would keep him in office until 2024.

Mr. Walker, a reporter for the Guardian, a British newspaper, has worked in Russia for two decades. His portrayal of Mr. Putin’s rule is based on interviews throughout Russia, from the Pacific shores to Europe. The man has astounding courage — seeking out, for instance, Chechen thugs who would happily put a bullet into his head.

https://www.washingtontimes.com/news/2018/feb/18/book-review-the-long-hangover-by-shaun-walker/
Posted by Paul Davis at 11:28 AM

Labels: book review, Joseph C. Goulden, Shaun Walker, The Long Hangover: Putin's New Russia and the Ghosts of the Past, The Washington Times