Media Madness: Donald Trump, The Press, And The War Over The Truth 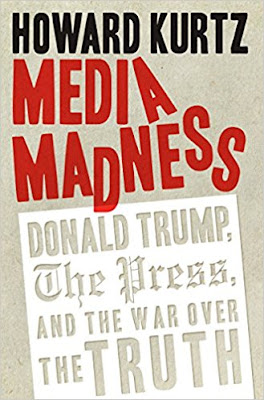 John R. Coyne Jr offers a review of Howard Kurtz’s Media Madness: Donald Trump, The Press, and the War over the Truth for the Washington Times.

The political war between conservatives and a largely liberal national media didn’t begin with Donald Trump. But with his election, it’s reached a new intensity.

“The country’s top news organizations have targeted Trump with an unprecedented barrage of negative stories, with some no longer making much attempt to hide their contempt,” writes veteran journalist Howard Kurtz in this strongly written and compelling analysis.

That contempt is encapsulated in this succinct statement from New Yorker editor David Remnick: “The election of Donald Trump to the presidency is nothing less than a tragedy for the American republic, a tragedy for the Constitution, and a triumph for the forces, at home and abroad, of nativism, authoritarianism, misogyny, and racism.”

This charge of “racism,” troubles Mr. Kurtz, thrown out by Mr. Trump’s critics “as an undisputed fact, not a journalist’s assessment, and there was no room for dissent on the score.” And even more troubling to Mr. Kurtz is how this attitude has come to permeate not just the editorial sections of newspapers but the news stories themselves, with reporters functioning as editorialists, rendering the once honored journalistic principle of objectivity no longer operative.

He quotes Jim Rutenberg of The New York Times, which vies with The Washington Post for the title of the country’s premier NeverTrump organ. In a 2016 piece, Timesman Rutenberg instructed his fellow journalists that no matter what their reservations about shedding objectivity — “uncomfortable and uncharted territory for every mainstream, non-opinion journalist” — they’re obliged to oppose Mr. Trump, “a demagogue playing to the nation’s worst racist and nationalist tendencies.”

Whatever the causes of what Mr. Kurtz calls “Trump Trauma” — perhaps fueled by an unconscious desire to return to Watergate glory by bringing down another president — the liberal media seem intent on destroying the Trump presidency.

And Donald Trump, writes Mr. Kurtz, “is staking his presidency on nothing less than destroying the credibility of the news media This is not just a feud It is scorched-earth warfare in which only one side can achieve victory.”

Mr. Kurtz is no apologist for President Trump, pointing out the president often generates negative stories through his own exaggerations and tendency to shoot from the lip. In a chapter titled “A Leaky Ship of State,” he writes that in the Trump White House, “just about everything leaked to the press.”