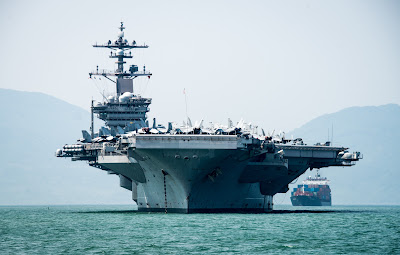 Back in 1971 the American aircraft carrier USS Kitty Hawk took a break from launching combat sorties against Communist North Vietnam from "Yankee Station" in the South China Sea and made a port call in Da Nang, South Vietnam.

I was an 18-year-old seaman serving aboard the carrier at the time.

Jim Garamone at the DoD News offers the below piece on the carrier visit:

WASHINGTON, March 5, 2018 — The USS Carl Vinson arrived in Danang, Vietnam, today, becoming the first aircraft carrier to dock in the country since the Vietnam War ended in 1975.

The Vietnamese port was also the site of the first arrival of U.S. combat troops, when Marines landed there in 1965.

The three American ships with about 6,500 sailors and Marines aboard are conducting a port visit that demonstrates how far U.S.-Vietnamese relations have progressed. Vietnamese leaders agreed to the four-day port call during President Donald J. Trump’s visit to the country last year.

“This visit marks a significant milestone in our bilateral relations and demonstrates the U.S. support for a strong, prosperous and independent Vietnam,” Defense Department spokesman Army Col. Robert Manning III told Pentagon reporters this morning. “The visit also builds on the positive momentum of the comprehensive partnership between the U.S. and Vietnam, and will not only serve to strengthen the bilateral defense relationship, but will also help enhance cultural and professional ties.”

The sailors and Marines will participate in cultural exchanges with their Vietnamese counterparts, and some personnel will visit a center for victims of Agent Orange -- a defoliant that American planes sprayed on the jungle to remove cover.

“Our nations’ relationship has reached new heights in the past few years, and USS Carl Vinson’s port visit to Vietnam is a reflection of that,” said Navy Adm. Scott Swift, the commander of the U.S. Pacific Fleet. “I am confident that engagements like this will further expand the comprehensive partnership between the United States and Vietnam.”

The port call and U.S. operations in the South China Sea are routine, Manning said. “They demonstrate our commitment to regional prosperity and stability,” he said.

The United States and Vietnam normalized relations in 1995. The first port visit to Vietnam following the war was by the cruiser USS Vandergrift in November 2003, which docked at Ho Chi Minh City on the Saigon River. In June 2012, then-Defense Secretary Leon Panetta visited the USNS Richard C. Byrd in Cam Ranh Bay -- the logistics hub of U.S. forces during the Vietnam War.

The South China Sea is off the coast of Vietnam, and that body of water sees $5 trillion in cargo pass through each year. A number of nations have competing territorial claims in the South China Sea region. Vietnam, China, Indonesia, the Philippines, Brunei, Thailand and Singapore have disputes in the area.

China has been aggressive in asserting claims in the South China Sea area, and has built islands on reefs and militarized those facilities.

The United States takes no sides in the disputes, but insists that freedom of navigation for all is maintained.

Note: The above photo of the USS Carl Vinson was taken by Petty Officer 3rd Class Devin M. Monroe.
Posted by Paul Davis at 7:06 AM