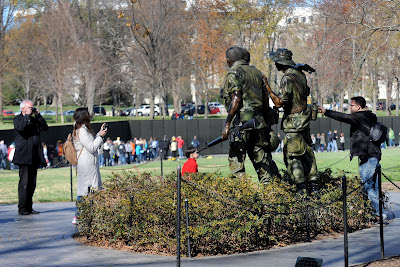 This is the first anniversary of that special day. DOD will also support hundreds of events in many states across the nation to recognize, honor and thank U.S. Vietnam veterans and their families for their service and sacrifices.

Deputy Secretary of Defense, Patrick M. Shanahan, will host the ceremony at the “The Wall” to continue the department’s contribution to the commemoration. He will be joined by Veteran’s Affairs Secretary, Dr. David Shulkin.

“We are proud to partner with the Department of Veterans Affairs in this endeavor,” said Shanahan. “Today is an opportunity to honor all Vietnam veterans who served, and to recognize the families that stood alongside them.”

The DOD, along with more than 11,000 organizations across the country, is joined by the Department of Veterans Affairs, one of its key Commemorative Partners, to help Americans honor our nation’s Vietnam veterans.

Authorized by Congress, established under the Secretary of Defense, and launched by the President in May 2012, the Vietnam War Commemoration recognizes all men and women who served on active duty in the U.S. Armed Forces from November 1, 1955 to May 15, 1975. Nine million Americans, approximately 7 million living today, served during that period, and the commemoration makes no distinction between veterans who served in-county, in-theater, or were stationed elsewhere during those 20 years. All answered the call of duty.

President Trump, in his presidential proclamation, stated: “During this Commemoration of the 50th Anniversary of the Vietnam War, we embrace our responsibility to help our Vietnam veterans and their families heal from the heavy toll of war. We remember the more than 58,000 whose names are memorialized on a black granite wall in our Nation’s capital for having borne the heaviest cost of war.”

By presidential proclamation issued on May 25, 2012, the commemoration extends from its inaugural event on Memorial Day 2012 through Veterans Day 2025.

Commemorative partners – local, state and national organizations, businesses, corporations and governmental agencies – have committed to publicly thank and honor Vietnam veterans and their families on behalf of the nation and have pledged to host a minimum of two events annually.
Posted by Paul Davis at 11:14 PM