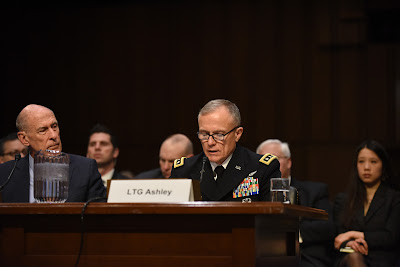 WASHINGTON, March 6, 2018 — These are dangerous times, and the threat of war is greater now than at any time since the end of the Cold War, the director of National Intelligence told the Senate Armed Services Committee today.

“We have entered a period that can best be described as a race for technological superiority against our adversaries, who seek to sow division in the United States and weaken U.S. leadership,” Coats said.

The director said the cyber threat is one of his greatest concerns and is his top priority. “From U.S. businesses to the federal government to state and local governments, we are under,” he said. “While state actors pose the greatest cyber threats, the democratization of cyber capabilities worldwide has enabled and emboldened a broader range of actors to pursue their malign activities against us.”

Russia will pursue even more aggressive with the intent of degrading U.S. democratic values and weakening American alliances. “Persistent and disruptive cyber and influence operations will continue against States and European countries and other allies, … using elections … as opportunities to undermine democracy and sow discord and undermine our values,” he said.

The director switched to weapons of mass destruction, saying that “North Korea will be the most volatile and confrontational WMD threat this year, and Russia will remain the most capable WMD power and is currently expanding its nuclear weapons capabilities.”

Syria used chemical weapons on its own people and terror groups such as the Islamic State of Iraq and Syria are pursuing the capability, Coats said.

The terror threat remains from ISIS to al-Qaida to Lebanese Hezbollah, he said. Iran remains the major facilitator of these groups.

“North Korea is a critical threat to the United States and our allies in Northeast Asia,” Ashley said. “North Korean leader Kim Jong Un has pressed his nation down a path to develop nuclear weapons and deliver them with ballistic missiles that can reach South Korea, Japan, Guam and the United States.”

“China's military modernization plan includes the development of capabilities for long-range attacks against adversary forces that might deploy or operate in the Western Pacific Ocean,” he continued. “China is leveraging its growing power to assert sovereignty claims over features in the East, the South China Sea, and the China-India border region.”

Looking ahead, Ashley said he believes China’s increasingly lethal joint force will be capable of holding and allied forces at risk at greater distances from the Chinese mainland.

Russia sees the United States as a major threat. “The Kremlin seeks to establish a sphere of influence over former Soviet Union states, prevent further eastward expansion of NATO and ensure that no major international issues are addressed without Russia's input or at its expense,” Ashley said. “The Kremlin views the powerful survivable strategic nuclear force as a foundation of Russia's national security, and sees modernized general-purpose and nonstrategic nuclear forces as critical to meeting its conventional military threats.”

“Iran remains the primary nation-state challenger to U.S. interests and security within the Middle East,” Ashley said. “Iran continues to improve its conventional capabilities to deter adversaries and defend its homeland. Iran has the region's largest ballistic military arsenal. They can strike targets throughout the region up to 2,000 kilometers from their borders.”

Iran remains committed to modernizing its military, building the capacity of its partners in the while balancing a desire to gain from its integration into the global economic system, he said.
Posted by Paul Davis at 1:55 AM