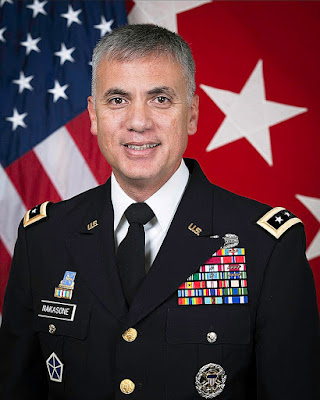 WASHINGTON, March 15, 2018 — President Donald J. Trump’s nominee to serve as the next director of the National Security Agency today promised to defend the nation and secure the future as he testified before lawmakers during his confirmation hearing here.

Lt. Gen. Paul M. Nakasone (seen in the above official photo), the commander of U.S. Army Cyber Command, spoke before the Senate Select Committee on Intelligence, which is considering his nomination to succeed retiring Navy Adm. Michael S. Rogers as NSA director.

He emphasized two elements that will help ensure national security.

The first focus, he said, is “continuing to hire great people that work at the NSA, not only hiring them, but also training them, developing them and ensuring that their long-term careers with the NSA are well-tended-to.”

Secondly, he said, the agency needs to continue to look at control mechanisms to provide the ability to safeguard networks and secure the environment.

If confirmed to the post, Nakasone will assume the current dual-hat arrangement of leading both U.S. Cyber Command and the NSA.

The general emphasized the importance of working with the private sector on technology to secure the future and to continue to attract the best and the brightest to serve.

“If confirmed, I know that a strong public-private partnership will be needed to ensure this country benefits from the leading-edge technology being developed and implemented today and into the future,” Nakasone said, adding that the agency’s mission and technological advances are what sets the NSA apart from the public sector and helps to attract young talent.

“We have to continue broad abilities to continue to recruit from a very diverse population -- academia, and industry, [and] within inside our government,” Nakasone said, noting he admires the agency’s ability to look at a broad range of capabilities, including people who have disabilities, and to provide the necessary infrastructure that will support them.

“Ten, 15, 20 years ago, we were concerned about what we said on phones. Today we’re concerned about what our soldiers wear, where they’re talking, where they’re able to be monitored,” he said. “This is indicative of how we have to approach the future. We are technologically informed -- we also have to be informed for operational security as well.”
Posted by Paul Davis at 2:14 PM