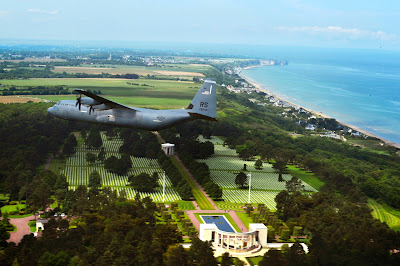 CHERBOURG, France, June 6, 2018 — “Soldiers, sailors, and airmen of the Allied Expeditionary Force: you are about to embark upon the great crusade, toward which we have striven these many months. The eyes of the world are upon you. The hopes and prayers of liberty-loving people everywhere march with you.”

Army Gen. Dwight D. Eisenhower (seen in the below photo), the supreme commander of the Allied Expeditionary Forces in Europe during World War II, spoke these words to his troops before the Battle of Normandy on June 6, 1944. 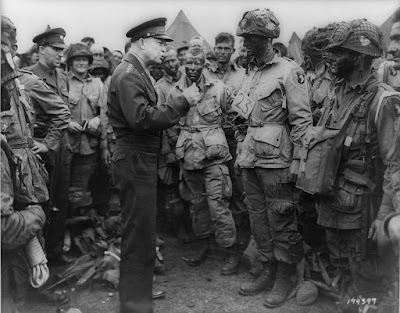 Eisenhower, knowing the operation would be costly, prepared his men to face an epic struggle.

“Your task will not be an easy one,” he said. “Your enemy is well trained, well equipped, and battle-hardened. He will fight savagely.”

The battle, known as D-Day, was bloody. On the first day of the invasion alone, Allied casualties exceeded 10,000 troops.

However, the Allies managed to break through enemy defenses and establish critical beachheads. These achievements paved the way for the liberation of Europe -- and ultimately victory over the enemy.

Fast forward 74 years later: U.S. and allied troops landed upon Normandy again -- not to liberate the region from tyranny, but to honor those who did. Aircraft from the U.S. and other allied nations airdropped parachutists, both military and civilian, over the town of Sainte-Mere-Eglise to commemorate the Normandy campaign.

Many of the aircraft in the formation came from the 37th Airlift Squadron, based in Ramstein Air Base, Germany. The 37th is a descendant unit of the 37th Troop Carrier Squadron, which dropped paratroopers near Sainte-Mere-Eglise on D-Day.

“The significance of us being here is to remind the people of what was achieved here,” said Air Force Capt. Kyle Foley, a 37th Airlift Squadron C-130J instructor pilot who served as the mission commander for the Ramstein airmen.

“It’s been an amazing experience to see the French people still excited about D-Day and the liberation of France,” he said.

Foley emphasized the importance of memorializing D-Day, saying that the event will provide valuable lessons to current and future generations.

Air Force Brig. Gen. Richard G. Moore Jr., commander of the 86th Airlift Wing, which includes the 37th Airlift Squadron, conducted memorial flights across the Normandy region prior to the airdrops over Sainte-Mere-Eglise. He led formations over former battlefields such as Omaha Beach and Pointe du Hoc.

Moore declared that the legacy of D-Day lives on in the partnerships forged between the U.S. and its partners in Europe today. Europe lives peacefully because of the courageous sacrifice of those who descended upon Normandy more than seven decades ago, he said.

“U.S. forces continue to stand with our European allies and partners ensuring Europe is whole, free, prosperous and at peace,” Moore said. “As we reflect on this 74th anniversary of D-Day, please take a moment to consider the powerful stories of these heroes and their courage. Think about the reality of so many lives lost in defense of our nation and allies, and the special grace shown by the families left behind. Reflect upon the sacrifice of those who gave their lives to guarantee the freedoms we enjoy today.”

Visitors to Omaha Beach today might find the scene typical of a sunlit shore: children playing and flying kites, couples walking hand in hand along the sea and tourists scouring the sand for shells. It can be difficult to imagine that the beach was the site of one of the bloodiest days in history.

But if they look in the hills above, they would see the Normandy American Cemetery where more than 9,000 U.S. troops rest in peace. The endless rows of white stone crosses and Stars of David serve as sobering reminders of the epic battle which took place there.

Foley said the sacrifices of the Allies in the Battle of Normandy altered the course of history.

“This is something that changed the course of the world,” he said. “It changed the shape of Europe and our relationship with our allies across the world. It was a big deal in the 1940s; it’s a big deal now in 2018. And, it will still be a big deal 10 years from now.”

When Eisenhower concluded his D-Day speech, he envisioned an era where liberty would overthrow tyranny.

“The tide has turned,” Eisenhower said to his men. “The free men of the world are marching together to victory. I have full confidence in your courage, devotion to duty, and skill in battle. We will accept nothing less than full victory. Good luck! And let us all beseech the blessing of almighty God upon this great and noble undertaking.”