How Communism Gave Birth To The World's Most Vicious Mafia 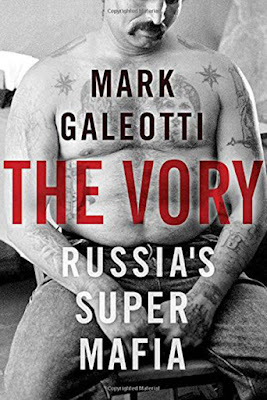 Brayden Simms at the New York Post offers a piece on a new book about Russian organized crime, The Vory: Russia’s Super Mafia.

Gennady Karkov, the notorious Soviet Union gangster known best as “The Mongol,” stood out amid a world of vicious criminals.

At the heart of the cold war, as the United States fought the Soviet Union to economic stagnation, the Russian mafia — called the vory, or “thieves in law” — waged their own private war on the communist state’s criminal capitalist underclass, and The Mongol helped lead the way.

Karkov, born 1930 in Kulebaki, some 186 miles east of Moscow, was a child of Josef Stalin’s purges and famine, of the Gulag’s forced industrialization and the Second World War. The specific details of his childhood are slim, but as Mark Galeotti details in his in-depth history of Russian organized crime, “The Vory: Russia’s Super Mafia,” “he soon fled the smog and shadow of Kulebaki’s foundaries and the workers’ barrack blocks around them and took to the underworld.”

By the time of Stalin’s death in 1953, Karkov, a young man of 23, was nearly ready to be crowned The Mongol, a king in his own right — a vory v zakone or “thief within the code” of the Vorovskoy Mir, a loosely affiliated group of mobsters with a standardized vernacular, design aesthetic and code of conduct.

There were criminals before Stalin, of course, and even vory. Horse thieves terrorized rural populations, and local gangs in city centers plied their trade in the nation’s slums, complete with pick-pocketing, burglary and petty theft. But Galeotti details how the chaos and corruption of Bolshevism emboldened the rise of the vory, gangsters who flourished under communism.

Yes, Soviet communism proved to be the ultimate racket, and Karkov a master racketeer. Clever and vicious, The Mongol — so named for his distinct Asiatic appearance — rose quickly through the criminal ranks, soon amassing a motley following of 30 or so thugs who terrorized the streets of Moscow in the ’60s and ’70s. Galeotti calls his gang “a finishing school for a generation of future kingpins.”

… Galeotti writes: “Karkov’s true legacy was not just a new generation of vory but also a whole new criminal world in which they would operate.”