Groups Such As ISIS Cannot Be Allowed To Exist, Defense Secretary Mattis Says 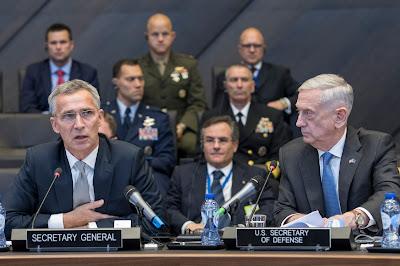 WASHINGTON, June 8, 2018 — While Iraq has liberated all of its territory once captured and held by the Islamic State of Iraq and Syria, the U.S.-led military campaign against the rogue organization continues in Syria, Defense Secretary James N. Mattis said at a meeting of the defeat-ISIS coalition at NATO headquarters in Brussels today.

Mattis attended a conference of the alliance’s defense ministers this week.

“A little over 100 hours ago, our [Syrian] partner forces began the first of several offensives to diminish ISIS’ physical caliphate,” the secretary said. “As operations ultimately draw to a close, we must avoid leaving a vacuum in Syria that can be exploited by the [Syrian President Bashar Assad] regime or its supporters.”

Despite the successes of the last year, the enduring defeat of ISIS is not over, Mattis said, noting that NATO approved a training mission yesterday and called it a step in the right direction. “We look forward to working with the new government of Iraq on this as we assist a key partner in denying our common terrorist enemy any chance to recover,” he said.

“Every battlefield is also a humanitarian field, even after the fighting stops. To ensure a lasting defeat and prevent an ISIS 2.0 requires all elements of our collective national power,” the secretary said. “Initiating and maintaining stabilization activities are essential, as citizens cannot return to normal life in communities cleared of explosives and debris, and those conditions that initially allowed ISIS to take root return.”

“Each of us also has an urgent responsibility to address the foreign-fighter detainee problem,” he added. “We all must ensure captured terrorists remain off the battlefield and off our streets by taking custody of detainees from our countries or quickly coming up with suitable options.”

The United States faces the same problem and is working diligently to find a way to solve it, Mattis emphasized. “Abrogating this responsibility is not an option, as it plants the seeds for the next round of violence against innocents,” he said.

As the U.S.-led coalition has repeatedly demonstrated, its greatest weapon against the enemy and the coalition’s greatest strength remains unity, he said.

It is critical that the strong spirit of collaboration fostered by the 75-member coalition be preserved as the coalition transitions from combat to stabilization operations, so other locations do not suffer the consequences witnessed in Iraq, Syria, the Philippines and elsewhere, the secretary said.

In the guiding principles of the defeat-ISIS coalition, it is noted that “’ISIS remains a serious threat to the stability of the region and to our common security,’” Mattis said, noting that the guiding principles provide a vision for the coalition’s future and reinforce the whole-of-government approach. “Today, we plan to follow these guiding principles with a joint statement highlighting our commitment to coordinate efforts to confront ISIS globally,” he said.

While the coalition is nearing the defeat of ISIS’ so-called physical caliphate in Iraq and Syria, terrorist operations elsewhere have increased, Mattis said, adding he’s seeking insight to further discussions.

“The [United States] remains committed to the conditions-based approach, underpinned by our shared investment in shared security, and the approach is reinforced by, with and through assistance from local partners to help consolidate our hard-earned military gains,” the secretary said. “Groups like ISIS cannot be allowed to exist. Today’s meeting provides an opportunity to recommit ourselves to this mission.”
Posted by Paul Davis at 1:37 AM