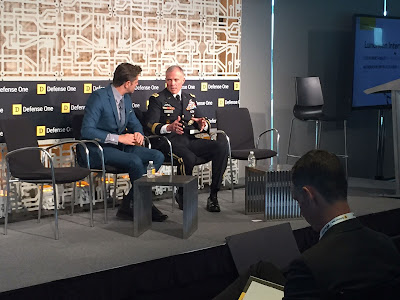 WASHINGTON, June 26, 2018 — The adage “forewarned is forearmed” has entered the digital era at the Defense Intelligence Agency, as leaders, collectors and analysts there seek to adapt to the changing security and technological world, the agency’s director said at the Defense One Tech Summit here today.

The agency is in the business of giving leaders strategic warning. “What are the emerging technologies that are coming out that we need to be thinking about?” Ashley said. “The other part of that is to inform the decision-makers and what they have to build to counter them.”

Hypersonics, anti-satellite capabilities, and sophisticated ground, sea, air capabilities must be countered, and the agency looks to gather information and intelligence on them Ashley said. The general talks often about analytic modernization. This concept deals with data. “How do we deal with big data? How do we deal with the wealth of information that is out there and available?” he said.

So much information is available that it is difficult for humans to digest it all, he pointed out. “One of the things we are working on now are analytic data teams,” he said. “How do we take a traditional analyst and link him up with a data scientist?” Ashley said he sees the job of an analyst morphing into that of a political scientist and data scientist in the future.

The agency is broadening its collection to deal with the new military domain of space. Ashley said he sees the domain growing over the next decade. “If you look to the National Defense Strategy, the central problem that it seeks to solve is [that] the technological gap that we have had the lead on is slowly collapsing,” the general said. “The goal is to maintain primacy and a leading role.”

Since 2001, the only domain the American military has been challenged on is the land domain, through improvised explosive devices and combat in cities. American dominance in the sea, air, cyber and space domains was not seriously contested by terror groups. “The re-emergence of great power competition – Russia and China – you start seeing a closing gap in all domains, and they are being contested,” he said.

Military capabilities to interdict satellites both in space and on the ground is possible, the general said. “In the warfighting doctrine, you have to account for the resilience you build into the domains, you have to build in redundancy, and in some cases, if it is degraded or denied, how do you fight in that realm?” Ashley said.

The general also discussed a concept current in the agency with regard to Russia – reflexive control – and it deals with hybrid warfare. The Russians use this to intimidate, coerce and scare nations into doing what is in Russia’s best interests. Ashley said the concept is an outgrowth of Soviet doctrine that the Russians continued to work on after the brea-up of the Soviet Union.

Identifying this is tough, the general said, using Russian involvement in Western elections as an example. “What’s happening now is you have a great deal of sensitivity across the European nations – they are actually looking for [reflexive control]. They are looking for those themes to ensure they will be able to put the truth out and counter to that.”
Posted by Paul Davis at 10:46 PM