Nine Lives: My Time As The West's Top Spy Inside Al-Qaeda 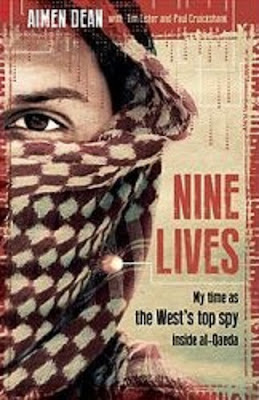 Joshua Sinai offers a good review in the Washington Times of Aimen Dean’s Nine Lives: My Times as the West’s Top Spy Inside Al-Qaeda

This is a dramatic account by a young Muslim from Saudi Arabia who had become so radicalized into Islamist extremism that he decided in 1994 (at the age 16) to travel to Bosnia and join a group of al Qaeda-affiliated foreign fighters who were fighting on behalf of Bosnia’s Muslims against their adversary Croatian and Serbian Christian militias.

What makes this account so interesting and important (and how it became a CNN documentary) is that Bosnia was the first of many jihadi battlegrounds in Asia and the Middle East that Aimen Dean (a pseudonym) was involved as a fighter and a member of an elite bomb-making team (including attempting to build a chemical weapon) during al Qaeda’s formative pre-9/11 period in Taliban-ruled Afghanistan.

It was there where he interacted with a “Who’s Who” of its top operatives, including Osama bin Laden (to whom he pledged personal allegiance), Khaled Sheikh Muhammad (9/11’s mastermind), Abu Zubaydah (the group’s logistical manager) and Abu Khabab (the group’s top bomb-maker).


Even more compelling, eventually, in 1998, Mr. Dean became so disillusioned with al Qaeda’s mass killings of innocent victims in the August 1998 bombings in Kenya and Tanzania and elsewhere, which were part of what he considered its hypocritical ideology and self-destructive warfare and political strategy, that he defected and became a double agent on behalf of MI6, the British intelligence service.