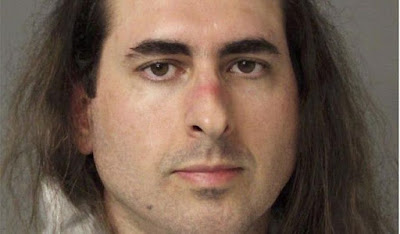 The Washington Times offers a piece on the killer who attack a newspaper in Maryland.

ANNAPOLIS — A man with a long grudge against Maryland’s capital-city newspaper was ordered held in jail Friday on five counts of first-degree murder after police said he blasted his way into the newsroom with a pump-action shotgun, killing five people in one of the deadliest attacks on journalists in U.S. history.

Jarrod W. Ramos, 38, was swiftly arrested as he tried to hide under a desk Thursday afternoon at the Capital Gazette in Annapolis, police said.

“The fellow was there to kill as many people as he could kill,” Anne Arundel County Chief Timothy Altomare said Friday.

Ramos was “uncooperative” with his interrogators, police said, and in court papers, authorities described him as “recalcitrant.” Appearing by video before he was denied bail on Friday, he appeared to watch attentively but never spoke. His public defenders had no immediate comment outside court.

State’s attorney Wes Adams said the judge’s finding that Ramos is a danger to society is justified because of evidence that he carefully planned the attack, barricading the back door so victims couldn’t escape, before using “a tactical approach in hunting down and shooting innocent victims.”

Ramos had a well-documented history of harassing the paper’s journalists, a feud that apparently began over a column about Ramos pleading guilty to harassing a woman. He filed a defamation suit against the paper in 2012 that was thrown out as groundless, and he often railed against its staff members in profanity-laced tweets.

https://www.washingtontimes.com/news/2018/jun/29/judge-capital-gazette-suspect-remain-detained/
Posted by Paul Davis at 10:45 AM