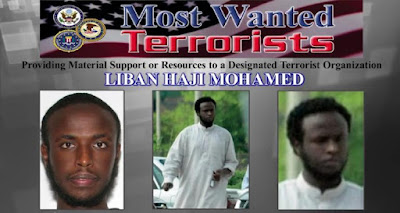 The U.S. Justice Department released the below information:
A federal grand jury returned an indictment today charging an Alexandria man with conspiring and attempting to provide material support to al-Shabaab, a terrorist organization operating in Somalia.
According to court documents, Liban Haji Mohamed, 34, a Somali-born naturalized United States citizen, allegedly left the United States in July 2012 with the intent to join al-Shabaab in East Africa. Al-Shabaab is a Somali-based insurgent and terrorist group that has claimed responsibility for many bombings in Somalia and Uganda and is known to have recruited Westerners. According to court documents, Mohamed allegedly attempted to recruit an undercover agent to travel to Somalia to provide combat training to al-Shabaab fighters.  Mohamed also allegedly planned to use his own media skills to improve al-Shabaab’s propaganda machine, which it has used to recruit Westerners.  Mohamed was a close associate of convicted terrorist Zachary Chesser, who was sentenced to 25 years in prison for attempting to provide material support to al-Shabaab.
In July 2012, Interpol, the world’s largest international police organization, issued a red notice seeking Mohamed as a wanted fugitive.  In January 2015, the FBI announced the addition of Mohamed to the “Most Wanted Terrorists” list, and is offering a reward of up to $50,000 for information leading to the arrest and conviction of Mohamed.
Mohamed is charged with conspiring and attempting to provide material support to a designated foreign terrorist organization.  If convicted, he faces a maximum penalty of 30 years in prison.  Actual sentences for federal crimes are typically less than the maximum penalties.  A federal district court judge will determine any sentence after taking into account the U.S. Sentencing Guidelines and other statutory factors.
Individuals with information concerning Mohamed are asked to contact the FBI or the nearest American Embassy or Consulate. Tips can be submitted anonymously at https://tips.fbi.gov. Additional information regarding Mohamed, including a poster with his picture, and the FBI’s “Most Wanted Terrorists” list can be found at: http://www.fbi.gov/wanted/terrorists/fugitives.htm.
Assistant Attorney General for National Security John C. Demers, G. Zachary Terwilliger, U.S. Attorney for the Eastern District of Virginia, and Larissa L. Knapp, Special Agent in Charge of the FBI Washington Field Office's Counterterrorism Division, made the announcement.  Assistant U.S. Attorneys James P. Gillis and John T. Gibbs, and Trial Attorney Rebecca A. Magnone for the National Security Division’s Counterterrorism Section are prosecuting the case.
An indictment is merely an accusation.  The defendant is presumed innocent until proven guilty.
Posted by Paul Davis at 8:18 AM