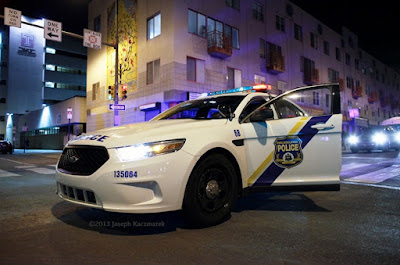 The U.S. Attorney's Office Eastern District of Pennsylvania released the below:

PHILADELPHIA – In honor of National Police Week, United States Attorney William M. McSwain recognizes and celebrates the service and sacrifice of federal, state, local, and tribal law enforcement. The week will be observed Sunday, May 10 through Saturday, May 16, 2020.
“There is no more noble profession than serving as a police officer,” said U.S. Attorney General William P. Barr. “The men and women who protect our communities each day have not just devoted their lives to public service, they’ve taken an oath to give their lives in order to ensure our safety. And they do so not only in the face of hostility from those who reject our nation’s commitment to the rule of law, but also in the face of evolving adversity – such as an unprecedented global health pandemic. This week, I ask all Americans to join me in saying ‘thank you’ to our nation’s federal, state, local, and tribal law enforcement officers. Their devotion and sacrifice to our peace and security will not be taken for granted.”
“Police officers work tirelessly to keep our communities safe. This week – and every week – they deserve our support, recognition, and gratitude for the sacrifices they make to protect us,” said U.S. Attorney McSwain. “In a time filled with uncertainty, police are more important than ever. And of course they are stepping up and providing us with outstanding service when we need it most.”
In 1962, President Kennedy issued the first proclamation for Peace Officers Memorial Day and National Police Week to remember and honor law enforcement officers for their service and sacrifices. Peace Officers Memorial Day, which every year falls on May 15, specifically honors law enforcement officers killed or disabled in the line of duty.

Each year, during National Police Week, our nation celebrates the contributions of law enforcement from around the country, recognizing their hard work, dedication, loyalty and commitment to keeping our communities safe. This year the coronavirus pandemic has underscored law enforcement officers’ courage and unwavering devotion to the communities they have sworn to serve.
Based on FBI data, 89 law enforcement officers died nationwide in the line of duty in 2019. Thus far in 2020, 20 law enforcement officers nationwide have been reported feloniously killed.
In the Eastern District of Pennsylvania, no officers were killed in 2019. All of America watched, however, as Maurice Hill shot six Philadelphia Police Officers during a seven-and-a-half-hour standoff in August 2019 in North Philadelphia. Miraculously, all six officers survived. Hill is currently in custody, pending trial. And in March 2020, Philadelphia Police Officer James O'Connor, 46, was murdered while serving a warrant in the Frankford section of Philadelphia. A 23-year veteran of the Philadelphia Police Department, Corporal O’Connor was posthumously promoted to Sergeant. Hassan Elliott and others are currently in custody and charged with the murder.
Comprehensive data tables about these incidents and brief narratives describing most of the fatal attacks are included in the sections of Law Enforcement Officers Killed and Assaulted, 2019.
The names of the fallen officers who have been added in 2020 to the wall at the National Law Enforcement Memorial will be read on Wednesday, May 13, 2020, during a Virtual Annual Candlelight Vigil. Because public events have been suspended as a result of the coronavirus, the vigil will be livestreamed to the public at 8:00 pm (EDT). The online event can be viewed at https://www.youtube.com/user/TheNLEOMF.
To learn more about National Police Week and the virtual candlelight vigil, please visit www.policeweek.org.
Posted by Paul Davis at 3:34 AM