Lock 'Em Up: Violent Protestors in Philadelphia And Elsewhere Should Be Arrested Now 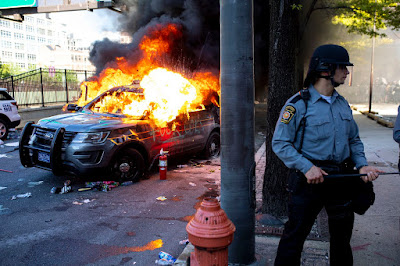 A criminal suspect died while being restrained by a Minnesota police officer. A video shows the officer with his knees on the suspect’s neck. The suspect later died.


End of a tragic story, right?


Rioting, burning and looting have occurred around the country, including Philadelphia.


The Philadelphia Inquirer reports that crowds of protesters gathered outside City Hall and the Philadelphia Museum of Art early Saturday afternoon to protest the death of the Minnesota suspect, and later a mob “morphed into chaos” in Center City.


“As the tumult unfolded — with people setting cars on fire, trying to topple the statue of Frank L. Rizzo, breaking windows at City Hall, and ransacking stores across Center City — it was difficult for police to contain the fallout, having to respond to a new incident as soon as they managed to get another one under control,” the Inquirer reported. “The protests posed an unenviable challenge for police. Philadelphia’s force — which for decades had a reputation for relying on brutality and coercive tactics — in recent years has consistently sought to avoid confrontation and escalation at protests. The city in 2016 also decriminalized most nuisance offenses to avoid heavy-handed enforcement ahead of the Democratic National Convention.”


Do you feel the need to protest racial politics and police actions? Fine. But there is no excuse for violence, theft and vandalism.


In my view, the timid and passive mayors of Philadelphia and other cities should allow the police, and the National Guard if needed, to take the gloves off and crack down on the violent protestors.

It is time for law & order.