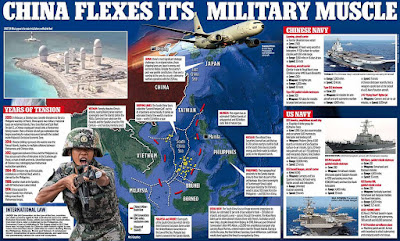 Mark Nicol at the Daily Mail offers a piece on Communist China taking advantage of the COVID-19 outbreak by displaying their military might in the South China Sea.


China has taken advantage of the world’s struggle with Covid-19 to mount a disturbing display of military firepower and push its illegal claims to land and oilfields in a two-million-square-mile area in the South China Sea.


The moves have triggered an immediate response from US President Donald Trump..


Deeply worried about Beijing’s insatiable desire for land and the way its military has occupied areas by stealth, Washington has sent three warships to the region.

China’s escalation of war games in the region follows decades of aggression by the Communist government.
You can read the rest of the piece via the below link:
https://www.dailymail.co.uk/news/article-8304031/China-flexes-military-muscle-Beijing-exploits-Covid-crisis-assert-control-South-China-Sea.html
Posted by Paul Davis at 7:30 AM