The Babylon Bee: Poll Finds Majority Of Democrats Would Have Voted For Ted Bundy If He'd Run Against Trump 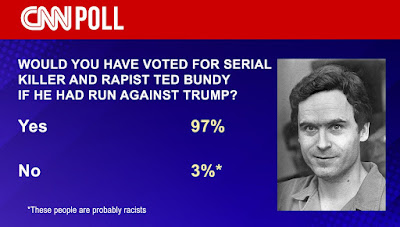 The Babylon Bee offers a satire of Democrat voters' preferences over Trump.


U.S.—A new CNN poll found that 97% of Democrats would have supported a Ted Bundy presidential run if the serial killer and rapist had run against Trump.


The poll confirmed that most Democrats would totally support a serial rapist as long as it meant beating Trump.


"Sure, he was a vicious, brutal rapist, but we have to get Trump out of the White House," said feminist attorney Lisa Bloom."


You can read the rest of the humorous piece via the below link: