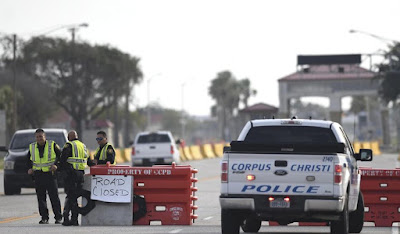 The Washington Times offers a report on the shooting at the Naval Air Station Corpus Christi.

A shooting at a Texas naval air station that wounded a sailor and left the gunman dead early Thursday was being investigated as “terrorism-related,” the FBI said, but divulged few details as to why.

The suspect was identified as Adam Alsahli of Corpus Christi, according to three officials familiar with the investigation who were not authorized to speak publicly and spoke to The Associated Press on condition of anonymity.

At about 6:15 a.m., the gunman tried to speed through a security gate at Naval Air Station Corpus Christi, opening fire and wounding the sailor, a member of base security, U.S. officials told the AP. But she was able to roll over and hit the switch that raised a barrier, preventing the man from getting onto the base, the officials said.


Other security personnel shot and killed the man.