FBI: A Conversation With The FBI's Legal Attache In Nairobi 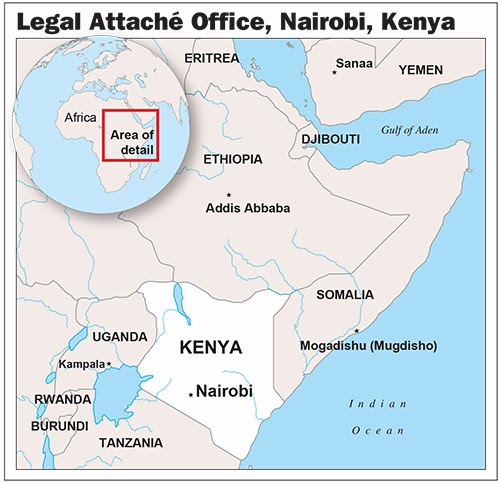 The FBI's web page offers an interview with the bureau's legal attache in Nairobi.

The FBI’s legal attaché, or legat, program places Bureau personnel in more than 60 countries around the world. Working primarily through U.S. Embassies, our employees serve at the pleasure of host country governments, and their core mission is to establish and maintain liaison with local law enforcement and security services. Such partnerships are critical in the fight against international terrorism, cyber crime, and a range of other criminal and intelligence matters.

FBI.gov recently sat down with Dennis Brady, the Bureau’s legal attaché in Nairobi, Kenya, to talk about our partnerships with the Kenyans and our work in that region of the world.

Q: What are the key threats in Kenya that impact Americans and U.S. interests?

Brady: The terrorist organization al Shabaab has been the biggest threat we face. Members of that group use IEDs [improvised explosive devices] to carry out terrorist attacks. They are known to throw grenades into local buses and attack local police officers. They also have a history of kidnapping Americans in Somalia—an area that our legat office covers. Piracy in Somalia is also a continuing threat.

And you can read part two of the interview via the below link: