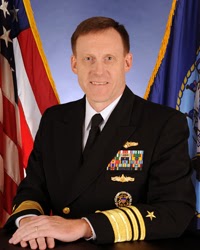 The American Forces Press Service offers the below piece:

Hagel also announced that he has designated Rogers to serve as director of the National Security Agency, and chief of the Central Security Service, according to the release.

"I am pleased that President Obama has accepted my recommendation to nominate Vice Adm. Michael Rogers as Commander of U.S. Cyber Command. And I am delighted to designate him also as Director of the National Security Agency," Hagel said in a statement issued today. "This is a critical time for the NSA, and Vice Adm. Rogers would bring extraordinary and unique qualifications to this position as the agency continues its vital mission and implements President Obama's reforms."

In his statement, Hagel noted that Rogers is "a trained cryptologist" with a Navy career spanning 30 years.

"As commander of the Navy's 10th Fleet and U.S. Fleet Cyber Command, he has already demonstrated his leadership and deep expertise in this critical domain," Hagel said of Rogers. "I am also confident that Adm. Rogers has the wisdom to help balance the demands of security, privacy, and liberty in our digital age."

Additionally, the release said, Richard Ledgett has been selected to serve as the NSA deputy director. In his new role as the senior civilian at NSA, Ledgett acts at the agency's chief operating officer. He replaces J. Chris Inglis, who retired from the position in January.

"If confirmed, Vice Adm. Rogers will be joined by an exceptionally able Deputy Director and senior civilian leader, Rick Ledgett, whom I congratulate on his appointment today," Hagel said in his statement. "Rick brings outstanding qualifications to the job. And I know that both he and Vice Adm. Rogers join me in thanking Gen. Keith Alexander for his remarkable leadership of the NSA and Cyber Command for nearly a decade."
Posted by Paul Davis at 2:06 AM