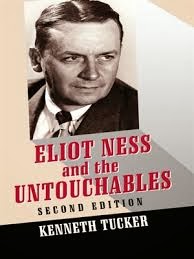 Katherine Skiba at the Chicago Tribune offers a piece on the proposed naming of a federal building in Washington D.C. after lawman Eliot Ness.

The headquarters of the Bureau of Alcohol, Tobacco, Firearms and Explosives, built in recent years, would be called the Eliot Ness ATF Building under the senators’ resolution.

The Chicago-born Ness is immortalized in the TV series “The Untouchables” and the 1987 film starring Kevin Costner. Capone, once Public Enemy No. 1, was convicted and imprisoned on tax violations after Ness and his team of federal Prohibition agents raided the gangster’s breweries and arrested dozens of his men.

According to the bureau, Ness spent 10 years in federal law enforcement with the ATF’s legacy agencies.

Note: If you want to learn about Eliot Ness, the man rather than the myth, and true crime history, you should read Kenneth Tucker's  Eliot Ness and the Untouchables.
Posted by Paul Davis at 4:20 AM