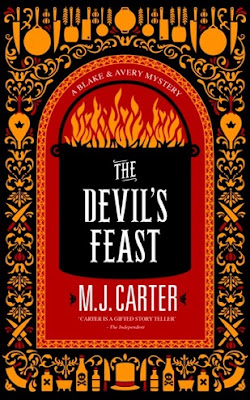 Miranda Carter, the author of The Devil's Feast, offers a piece in the British newspaper the Guardian on crime writers and food.


In “The Noble Bachelor” Sherlock Holmes presents Watson with a brace of woodcock and a pâté de foie gras pie. Holmes himself was partial to curried chicken and mixed his own blend of earl grey and lapsang souchong. Inspector Maigret would make a detour for skate wings with black butter, mussels in cream and choucroute. American mystery writer Rex Stout’s Nero Wolfe weighed “a seventh of a ton”, and employed a Swiss chef called Fritz who made him “Shad roe mousse Pocahontas” and “Avocado Todhunter” (a rather anaemic combination of avocado, watercress, lemon and crushed ice). Detective Van der Valk (the creation of the almost forgotten former chef Nicolas Freeling) ate his salt herring “the way the Dutch do, holding it up above his mouth like a seal in the zoo”. Even the no-nonsense Sam Spade slid into a booth at San Francisco’s famous John’s Grill in The Maltese Falcon to order his lamb chops, baked potato and sliced tomato. Crime writing has had a long – and body-strewn – affair with food.

Read more
For of course, as the great 19th-century food chemist Frederick Accum wrote, sometimes “there is death in the pot”. In her 1930 classic Strong Poison, Dorothy L Sayers had her heroine Harriet Vane stand trial for poisoning her ex-lover with a sweet omelette. Poison was Agatha Christie’s preferred method of dispatch by far – having been a dispensing chemist she knew a lot about it. It is the instrument of murder in almost half her books, added to, among other things, marmalade, tea, cocktails (And Then There Were None), a butter sauce for fish (Sad Cypress) and a bitter chocolate cake (A Murder is Announced).
Time, if anything, has only fed crime writing’s appetite for food. Today one can hardly move for detectives intent on dinner.
You can read the rest of the piece via the below link:

https://www.theguardian.com/books/2016/nov/05/dining-death-crime-fiction-miranda-carter
Posted by Paul Davis at 6:06 AM