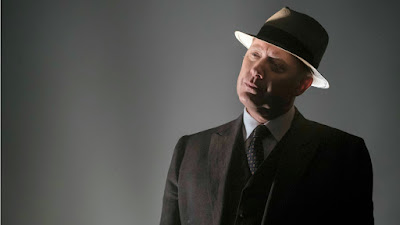 My wife and I enjoy The Blacklist, a clever and often amusing TV crime thriller.

Mostly, we enjoy James Spader (seen in the above photo), an actor that I had not much cared for in his previous roles.


No one loves a great scene more than the person who first dreamed it up: the writer. We're asking shows' creators and writers to tell ET all about getting to see their most cherished moment from their series make it from script to screen.
For Jon Bokenkamp, creator of NBC’s The Blacklist, the scene that catapulted the crime thriller into more than a procedural came early in the first season. By the first few episodes, the drama starring James Spader and Megan Boone was already considered a breakout hit.
It was a moment in the 11th episode, titled “The Good Samaritan,” in which Spader’s Raymond “Red” Reddington -- one of the FBI’s most wanted fugitives -- established himself as an unexpected and charming anti-hero that viewers rooted for. Here, Bokenkamp explains why an insignificant scene turned the tide for The Blacklist.