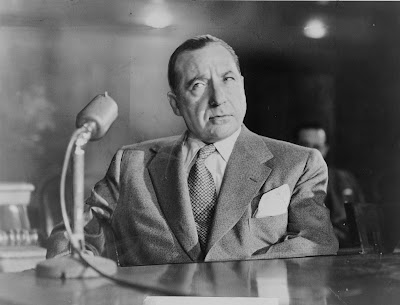 Historynet.com offers a piece from American History Magazine on the encounter between New York Cosa Nostra boss Frank Costello (seen in the above photo) and Senator Estes Kefauver in 1951.


Television’s most exciting programming in March 1951 featured two hairy hands fidgeting as a disembodied voice with a gruff New York accent answered questions—or, more often, dodged them.
That may not sound like appointment TV, but the images and voiceover fascinated more than 20 million American viewers. The hands and voice belonged to Frank Costello, “the Prime Minister of the Underworld.” The mob boss was testifying before the U.S. Senate Special Committee to Investigate Crime in Interstate Commerce, which was airing its latest round of hearings live on the brand-new medium. Though few households owned TVs, people crowded bars and restaurants that did to follow the inquiry. Often more than one station in a market carried committee sessions in their entirety.
“Millions Glued to TV for Hearing,” a New York Times headline read. “Home Chores Wait, Shopping Sags.”
You can read the rest of the piece via the below link:

You can also watch a brief video clip of Frank Costello testifying via the below link:

And you can watch a TV biography of Frank Costello via the below link: