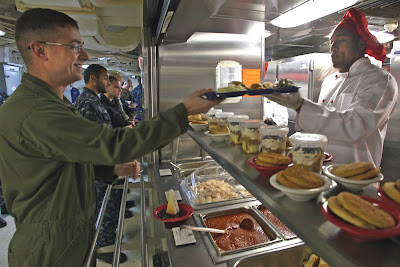 Jim Garamone at the DoD News offered the below report yesterday:
WASHINGTON, Nov. 23, 2016 — Tomorrow isn’t Thanksgiving for America’s enemies.
While the vast majority of Americans will be sitting down with family for a fall feast, hundreds of thousands of U.S. service members will be on guard around the world, ensuring their fellow citizens enjoy a day of peace.

A USS McCampbell sailor disembarks the Royal Brunei Navy ship KDB Darussalam to board a rigid hull inflatable boat during a visit, board, search and seizure training exercise in the South China Sea, Nov. 17, 2016, as part of Cooperation Afloat Readiness and Training 2016. Navy photo by Petty Officer 2nd Class Christian Senyk
For them, it is another duty day.
There are roughly 1.3 million service members on active duty in the military and another 800,000 in the reserve components. They are supported by about 750,000 DoD civilians and thousands of DoD contractors.
Today, there are around 275,000 forward-deployed U.S. service members. They serve in more than 100 countries and on every continent.
Some are in harm’s way. There are about 9,800 U.S. service members in Afghanistan. Most are helping Afghan allies maintain control of their country, while others are taking the fight to violent extremists who hope to use Afghanistan to plan attacks against the United States and its allies.
There are 4,960 U.S. service members in Iraq. They are helping Iraqi forces take the fight to the Islamic State of Iraq and the Levant. In Syria, there are about 300 service members helping Syrian democratic forces take on ISIL around Raqqa.
Troops at the Ready
These forces are supported by others based in Turkey, Kuwait and elsewhere in the region.
There are about 28,000 American service members in South Korea ready to “fight tonight,” from the Demilitarized Zone to Busan.
There are about 50,000 American service members based in Japan.
In Europe, Russian aggression in Ukraine and threats to NATO required a response from the United States with troops deploying to the eastern countries of the alliance on a rotational basis.
In Africa, troops are working with local nations to strengthen nations in their fights against Boko Haram and other violent extremist organizations.

Army 1st Lt. Patrick Abele, left, 1st Squadron, 75th Cavalry Regiment, Task Force Strike, and Marine Corps Master Sgt. Travis Madden, Special Purpose Marine Air Ground Task Force - Crisis Response - Central Command, monitor the status of a joint readiness drill at Qayyarah West Airfield, Iraq, Nov. 17, 2016. Army photo by 1st Lt. Daniel Johnson
In South America, U.S. forces are working with allies to curb the drug trade and stop transnational crime networks.
Overall, the Army has 183,630 soldiers committed to support six geographic commands, according to Army officials. There are roughly 4,000 in U.S. Southern Command, 33,000 in U.S. European Command, 8,000 in U.S. Africa Command, 18,000 supporting operations for U.S. Northern Command, 39,000 in U.S. Central Command, and 72,000 in U.S. Pacific Command.
The Air Force has 63,329 active-duty airmen stationed overseas. They range from the combat zones to Ramstein Air Base, Germany, to Kunsan Air Base in South Korea. In addition, thousands of airmen will work this weekend -- as they do year-round --maintaining America’s nuclear deterrent in the heartland of the nation.
The Navy has roughly 73,000 deployed sailors. Some 1,300 submariners are on patrol aboard ballistic missile submarines or attack boats. Many other sailors are at sea maintaining U.S. presence in the South China Sea, the Persian Gulf, the Mediterranean Sea and the oceans of the world. It is truly a global force.
Marines are aboard these ships, also, as well as serving in posts in the combat zones, and maintaining readiness from Japan to Australia to Norway. Marines are working with allies in the Philippines, and helping train Iraqi forces in al-Taqaddum.
Thousands of service members will guard America using space-based assets and thousands more will protect DoD assets in cyberspace.
Posted by Paul Davis at 11:05 AM