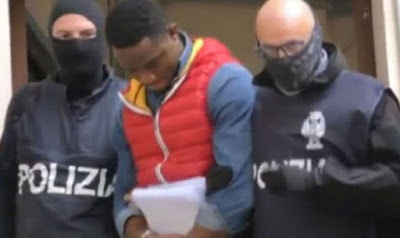 Simon Osborne at the British newspaper the Daily Express reports on a new organized crime threat in Italy.

The Black Axe - a Nigerian criminal network that rules by fear - is involved in drug dealing, prostitution and the fraudulent transfer of money between Europe and Nigeria.

And the ruthless organisation is now working alongside the Sicilian mafia - the notorious and powerful Cosa Nostra - after striking a deal with underworld bosses in the island’s capital Palermo and buying the rights to operate in designated areas.

Deputy prosecutor Leonardo Agueci said: "Cosa Nostra tolerates the Nigerian mafia in Palermo. Cosa Nostra allowed the Nigerians to organise a subordinate structure they were tolerated as long as they didn’t come outside their perimeter.”
You can read the rest of the piece via the below link: