Spies In Palestine: Love, Betrayal, And The Heroic Life Of Sarah Aaronsohn 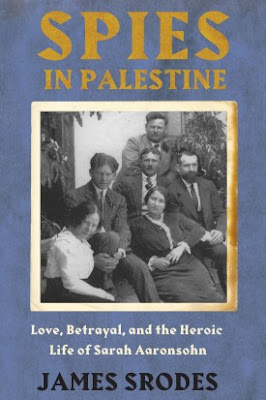 Veteran journalist and author Joseph C. Goulden offers a good review in the Washington Times of James Srodes' Spies in Palestine: Love, Betrayal, and the Heroic Life of Sarah Aaronsohn.


In more than half a century of reading intelligence literature, seldom have I encountered an operative with the raw courage of Sarah Aaronsohn. Whatever spy tradecraft the woman knew was self-taught. She had to contend not only with hostile neighbors, but with Turkish security officers who delighted in fashioning new and gruesome ways to torture adversaries.
Ms. Aaronsohn’s story is grippingly told by James Srodes in an account that also explores, in brisk and incisive language, a phase of World War I that hisorians tend to skim past — the attempts of Kaiser Germany and allied nations of the Ottoman Empire to seize the Suez Canal, cutting Great Britain’s lifeline to India and the East.
You can read the rest of the review via the below link:

http://www.washingtontimes.com/news/2016/nov/27/book-review-spies-in-palestine-love-betrayal-and-t/
Posted by Paul Davis at 7:44 AM