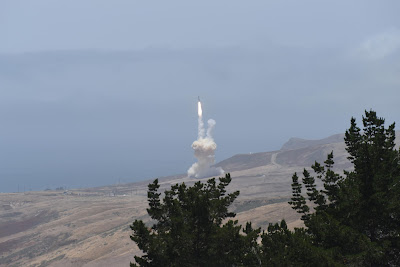 WASHINGTON, May 31, 2017 — Yesterday’s successful test of part of the nation’s ballistic missile defense system shows that the United States can defend itself against the threat of ballistic missile launches from North Korea or Iran, the director of the Missile Defense Agency said today.

Navy Vice Adm. James D. Syring, speaking to members of the press by telephone from Schriever Air Force Base, Colorado, said the test replicated an operational scenario that concerns the military and represents a critical program milestone.

“I was confident before the test that we had the capability to defeat any threat that [North Korea or Iran] would throw at us,” Syring told reporters, “and I'm even more confident today, after seeing the intercept test yesterday, that we continue to be on that course.”

The Ballistic Missile Defense System can target an incoming ballistic missile at three points in its trajectory.

These are the boost phase, from launch through ascent, 1-5 minutes; the midcourse phase, when the missile booster burns out and the missile coasts in space toward its target, up to 20 minutes; and the terminal phase, a brief period when the missile reenters the atmosphere, according to the MDA website.

Yesterday’s test involved the midcourse phase and was system’s first live-fire event, matching a ground-based interceptor carrying an exo-atmospheric kill vehicle against an intercontinental ballistic missile-class threat designed to replicate something that might come at the United States from North Korea or Iran, Syring said.

During the test, the target ICBM launched from the Reagan Test Site on Kwajalein Atoll in the Marshall Islands. Sensors fed target acquisition and tracking data to the command, control, battle management and communication system. Sea-based x-band radar positioned in the Pacific Ocean also acquired and tracked the target.

The ground-based missile defense, or GMD, system received the target tracking data and developed a fire-control solution to intercept the target.

Then a ground-based interceptor -- a multistage solid-fuel booster -- launched from Vandenberg Air Force Base in California, carrying the exo-atmospheric kill vehicle toward the target ICBM’s location in space. The interceptor released the kill vehicle, which used guidance data transmitted from ground and onboard sensors to collide with and destroy the target warhead, the MDA website says.

The interceptor tested yesterday is the same configuration that will complete the fielding of 44 total interceptors by the end of 2017, the admiral said.

Syring said that though this was a developmental test, the scenario is the same as one they would expect to occur during an actual operational engagement.

“Based on all the data we've received to date, all indications are that all our system performed exactly as designed,” he said.

Ballistic missile defense is an incredible challenge, the admiral explained. The defending missile must intercept a missile that can travel thousands of miles per hour, in this case outside the earth's atmosphere.

“Our mission becomes more challenging as time goes on as [adversaries] continue to develop increasingly complex threats. But yesterday's test did demonstrate that the system continues to improve and mature, and it is ready to defend the homeland today,” Syring said.

The next test, to take place in the fall or later in the 2018 calendar year, will involve one target and two interceptors/kill vehicles, the next step in ever-increasing operational realism. The program plan for testing adversary ICBM salvos is scheduled for the 2023 time frame, the admiral said.

Ahead of the Evolving Threat

Syring said that the interceptor tested yesterday outpaces the threat to the United States through 2020.

The entire test program is based on intelligence forecasts and projections and where adversaries may be with respect to reentry vehicle technology, countermeasure technology and rocket-motor technology, the admiral said.

“And, we seek to replicate many of those intelligence projections in the tests that we conduct,” he added.

An ongoing program for a redesigned kill vehicle will be flight-tested by the end of calendar year 2019 and, Syring said, “will be the next step in not only improving reliability but improving performance against the evolving threat.”

The fiscal 2018 MDA budget proposal includes a multi-object kill-vehicle program that MDA and industry partners will begin developing in 2018 and are targeting the 2025 time frame for that.

“We're in a very good step-wise progression here of not only increasing reliability but being ahead of where we believe the threat will go in terms of complexity, countermeasures and ultimately consideration for capacity down the road,” the admiral added.

Note: The above DoD photo was taken by Senior Airman Robert J. Volio.

You can click on the above photo to enlarge.
Posted by Paul Davis at 1:57 AM