Been There, Done That: Sailors Manning The Rails As Aircraft Carrier Returns To San Diego Homeport 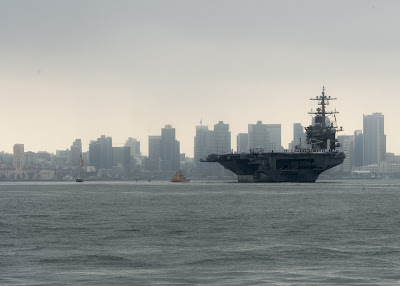 The U.S. Navy released the above photo of sailors manming the rails of the Nimitz-class aircraft carrier USS Carl Vinson (CVN 70) as it returns to its homeport at Naval Air Station North Island, Calif.

I recall manning the rails as a young sailor aboard the aircraft carrier USS Kitty Hawk as we returned to San Diego from a WESTPAC deployment in 1971.

You can click on the above photo to enlarge.
Posted by Paul Davis at 12:30 PM