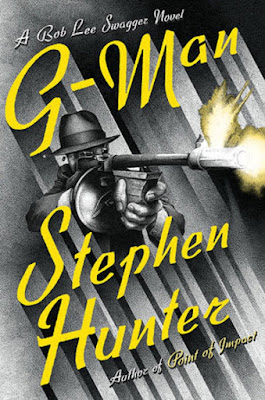 The Washington Times published my review of Stephen Hunter’s G-Man.

“Don’t shoot, G-Man,” Machine Gun Kelly cried out to the federal agents who were moving in to arrest him in 1933. The term later came to be synonymous with FBI special agents.

As Bryan Burrough noted in his excellent true crime book “Public Enemies: America’s Greatest Crime Wave and the Birth of the FBI, 1933-34,” J. Edgar Hoover publicly mandated that all agents have a law degree, but he quietly, and wisely, also hired Southwestern lawmen to compliment his lawyer-agents. These “Cowboys,” as they were known, were knowledgeable about firearms and had considerable experience with gunfights against armed and desperate criminals. As the federal agents were going up against violent bank robbers such as Pretty Boy Floyd, Baby Face Nelson and John Dillinger, the Cowboys were needed to back up the inexperienced agents with law degrees.

In Mr. Hunter’s series of thrillers about the fictional Swagger family, Charles Swagger is the grandfather of Bob Lee Swagger, a former Vietnam War Marine sniper, and father of Earl Swagger, a former World War II Marine Medal of Honor winner and Arkansas state trooper. All of the Swaggers are gunmen and Mr. Hunter, a gun enthusiast, writes knowledgeably about guns.

“G-Man,” the 10th in the series, alternates between Charles Swagger’s story in 1934 and Bob Lee Swagger’s present day story. Bob Lee Swagger is an elderly, tall, and lanky man, looking more like Clint Eastwood than Mark Wahlberg, who portrayed the former sniper in the film “Shooter,” or Ryan Phillippe, who plays Bob Lee Swagger in the TV series “Shooter.”

… All of the infamous criminals and famous lawmen from the Depression-era make an appearance in the novel and Mr. Hunter places Charles Swagger at the center of every famous gunfight.