The Doddering Don: 100-Year-Old Crime Boss Bears The Odds, Is Released From Prison 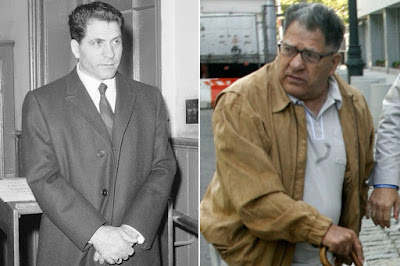 Michael Hechtman at the New York Post offers a piece on a 100-year-old mobster released from prison.

Geriatric gangster John “Sonny’’ Franzese — the oldest guest of the federal prison system — is a free man at the age of 100.

The Colombo family underboss was rolled out of the Federal Medical Center in Massachusetts in a wheelchair Friday and headed to the home of his daughter in Brooklyn, Newsday reported.

At the age of 93, he was sentenced to eight years in prison for shaking d own the Hustler and Penthouse strip clubs in Manhattan.

Authorities said at the time the doddering don — whom they believed responsible for the murders of between 50 and 100 people — could be released at the age of 100 if he behaved himself in the lockup.

Assistant US Attorney Cristina Posa doubted Franzese would live that long. She told Judge Brian Cogan, who sentenced him, that “for him to die now as a criminal in jail is not an inappropriate response to the lifestyle he lived.”

Posa added, “He is largely responsible for the glamorization of the Mafia over the past century.’’