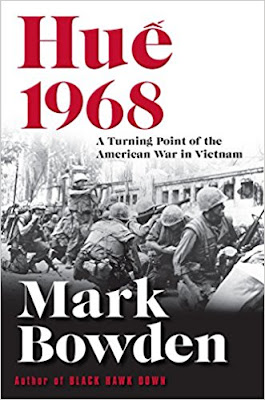 Bing West, an author and Marine veteran of the Vietnam War, offers an interesting and enlightening piece in National Review on Mark Bowden’s new book Hue 1968: A Turning Point of the American War in Vietnam and the comparisons of Vietnam to Iraq and Afghanistan.

In 1968, more than 500,000 Americans and 800,000 South Vietnamese troops were fighting 400,000 Viet Cong guerrillas and North Vietnamese (NVA) soldiers. In early February, the enemy launched a surprise attack against dozens of cities and bases throughout the 400-mile length of South Vietnam. While most of the offensive was beaten back within days, it received enormous press coverage and badly shook the confidence of the military and political leadership in both Saigon and Washington.

Hue 1968: A Turning Point of the American War in Vietnam, the new book from Mark Bowden of The Atlantic, tells the tactical narrative of these events splendidly — albeit with a dubious epilogue focused on broader questions of strategy and foreign policy.

The most savage battle occurred inside the historic city of Hue in the northern part of the country. Ten thousand NVA seized the heart of the city, including the ancient citadel enclosed by stone walls 20 feet thick. For 25 days a confused, chaotic battle raged up and down the city’s streets. When it ended, most of the city was destroyed, and the death toll included approximately 250 Americans, 500 South Vietnamese and 5,000 North Vietnamese soldiers, plus 6,000 civilians killed in the fighting and another 2,000 executed by the NVA.

Bowden has stitched together dozens of riveting squad-level firefights, writing from individual points of view collected via dozens of extended interviews over four years of research. Via this accumulation of short stories depicting love, sacrifice, gore, madness, valor, blood, and horror, the reader follows the battle down the deadly streets day by day.

… In the book’s epilogue, Bowden writes, “the battle of Hue and the entire Vietnam War seem a tragic and meaningless waste. . . . As some of the nation’s more recent wars have helped to illustrate, ‘victory’ in Vietnam would have been neither possible nor desirable.” This exculpation by blanket denial is both mystical and bewildering. It does not fit with the focus (one significant 25-day urban battle) or the deep research of the book.

Yes, the ongoing wars in Iraq and Afghanistan are comparable to Vietnam in two particulars. First, in all three cases America insisted upon democratic nation-building that was resisted by the indigenous cultures and eventually exceeded politically sustainable resources. Second, in Vietnam, we conceded a vast sanctuary to our enemy; in Afghanistan, we similarly allowed Pakistan to provide aid and refuge to the Taliban and other terrorist groups.

However, unlike North Vietnam, the Islamist terrorists pose a continuing danger to America. Defeating them cannot be dismissed as “neither possible nor desirable.” There must be “victory,” narrowly defined as an end state that is tolerable to our security interests. Tell me where we are in three years if I follow your strategy should be the directive the commander-in-chief issues to his generals. And most certainly Bowden’s aversion to nation-building should be heeded in regards to our future role in Syria.

… Bowden has written a classic narrative about the role of grit and the individual soldier in urban battle. 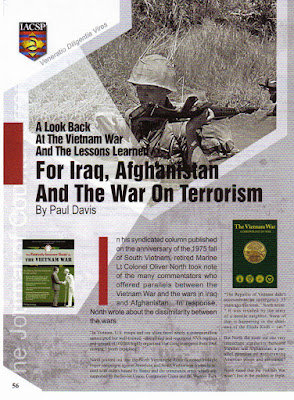 You can also read my Counterterrorism magazine piece on the Vietnam War and the lessons learned for Iraq and Afghanistan via the below link:

Note: On one point I disagree with Mr. West. The North Vietnamese were in fact a threat to America. They were a communist client state of the Soviet Union, a nation that had dreams of communist world domination. This is a fact - the Soviet leaders said so, many times. The Vietnam War was but a battle in the Cold War with the Soviet Union. And America won the Cold War.
Posted by Paul Davis at 6:32 PM