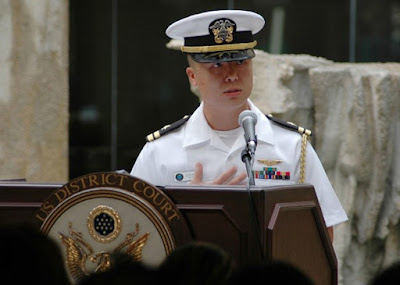 Courtney Mabeus at the Virginian-Pilot offers a piece on the sentencing of a naval officer who pleaded guilty to passing classified information.

Lt. Cmdr. Edward C. Lin (seen in the above U.S. Navy photo), 40, also will be dismissed from the Navy under the sentence issued late Friday by military judge Cmdr. Robert Monahan, who deliberated for four hours. Monahan sentenced Lin to nine years, but under a pretrial agreement he will serve six, receive credit for the more than 600 days he was held before trial and have three years suspended.

Lin’s sentencing followed a two-day hearing during which he offered the first personal details in a case that once was reported as a sex-for-secrets intrigue. Lin described a series of reckless, arrogant missteps in which he failed to report foreign contacts and that led him to share unspecified classified information.

“I’m physically ill when I think about what could have happened because of what I said,” Lin said Friday.

Lin was arrested in September 2015 in Hawaii where he was planning to board a plane to China to meet a woman he met online. He initially faced espionage charges under the Uniform Code of Military Justice. But in May he pleaded guilty to two less onerous charges – under the Espionage Act – that he deliberately disclosed classified information. He also pleaded guilty to charges involving failure to report his foreign contacts, twice mishandling classified information and twice making false statements about his travel plans. Prosecutors dropped other charges, including adultery and prostitution.