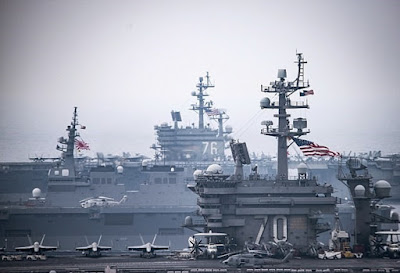 David Burke at the British newspaper the Daily Mail offers a piece on the U.S. naval show of force off the coast of North Korea.

Two US warships are carrying out a dramatic show of force close to North Korea's borders in the wake of missile launches by despot Kim Jong-un.

The huge aircraft carriers, seen together for the first time, have joined with Japan's maritime self defense force for drills in the Sea of Japan.

It comes days after the US Pacific Command reiterated its 'ironclad commitment' to protecting allies in South Korea in Japan following the launch of a short-range ballistic missile by Kim's regime.

You can read the rest of the piece and view U.S. Navy photos via the below link: 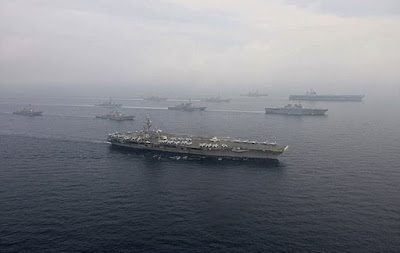 Note: You can click on the above photos to enlarge.
Posted by Paul Davis at 10:50 AM